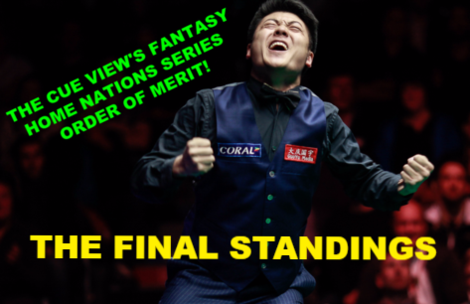 ​Throughout this inaugural Home Nations Series I have been keeping a separate 'Order of Merit' for the accumulative prize money won in Manchester, Belfast, Glasgow and Cardiff. Please see previous articles hereandhere.

Following the conclusion of the Welsh Open last weekend, the final standings are now complete. As I have suggested previously, I thought this list should have been used for a 'Grand Finals' type event. Perhaps replacing the upcoming Players Championship, which in my opinion will be of little difference to the recent World Grand Prix. I have listed the Top 16 finishing positions.

Not all of the top players entered all of the events. There are a few big name omissions from the below list. World Number 1 Mark Selby didn't take part in Northern Ireland or Scotland and only cashed £6,000 after losing in Round 2 of the English Open and Round 3 of the Welsh Open.

Stuart Bingham finishes on top of our rankings courtesy of banking £70,000 from his Welsh Open success, and £20,000 from reaching the Last 4 at the English Open.

As expected, the other tournament winners (Liang, King and Fu) all feature up top, however Judd Trump came third because of Runners-Up spots in England and Wales, plus a Semi finish in Scotland (he withdrew from Northern Ireland).

There were four different winners from the four events. No player made more than £90,000 - World Snooker's 'Million Pound Bonus' was locked up very safe in the vault this time around.

Another observation is that in each final the betting underdog upset the odds in getting the win.

Congratulations Stuart - I can't offer you a million pound cheque though...

Written and published by Michael Day on the 21st February 2017