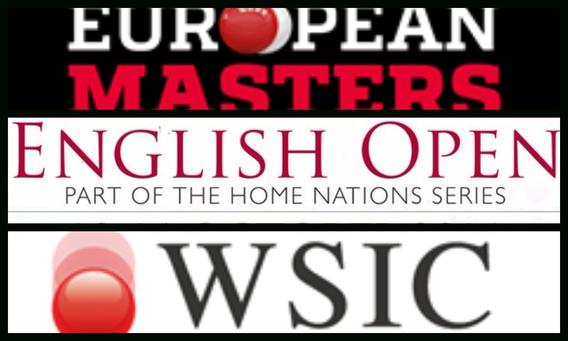 After six days of qualifying in Preston, tomorrow sees the start of October's 'Triple Crown' that consists of the venue stages for the inaugural European Masters and English Open, as well as the 5th International Championship from China.

Our first port of call on Monday is the European Masters that takes place at the Circul Globus in Bucharest, Romania.

It is the first time that Romania will host a professional snooker tournament, although the foundations of this event were discovered due to the packed audiences that watched Ronnie O'Sullivan play then World Champion Stuart Bingham in exhibitions there last year. With the European Tour Series now defunct, it is pleasant to see new European countries still getting involved. Provided it doesn't run at a loss, it will be played here in 2017 and 2018 too.

With the exception of heldover Last 64 ties involving Mark Selby and O'Sullivan (organiser's request), players had to come through two rounds of qualifying to appear in the Last 32 draw here.

Having put away Lyu Chenwei 4-1 in the Last 128, O'Sullivan will have to be very weary of his next opponent, Daniel Wells, who is on a high having dismissed Mark Allen during International Championship qualifying on Saturday. Likewise, Selby faces experienced campaigner Fergal O'Brien, who himself had a successful time at the Guild Hall earlier this week.

11 of the World's current Top 16 will be present in Bucharest. Bingham, Mark Williams, Joe Perry and Kyren Wilson perished in Preston, whilst new Shanghai Masters champion Ding Junhui withdrew. It does leave some open gaps in the draw, but there is sure to be some big hitting match-ups throughout.

​Should World Number 1 Selby beat O'Brien, he would clash with another former ranking winner in Dominic Dale in the Last 32.

World Number 16 Barry Hawkins needs to pick up some prize money points to protect his elite ranking; especially given he lost during IC qualifying a few days ago. He plays comeback kid Michael Wild, who is featuring at this stage of a major ranking event for the first time in his career.

World Number 64 Yu Delu takes on World Number 65 Alfie Burden, whilst 16 year old rookie Yan Bingtao will meet Ricky Walden. The promising Yan dropped just one frame in his two matches to get here. Could he be the next new Chinese player to lift a ranking trophy?

​A very difficult section to predict with Top 16 stars John Higgins, Judd Trump and Marco Fu - in fact, all of the players in this quarter have either won or reached the final of a professional event in recent years.

Higgins fought back from 3-0 down to Jimmy Robertson in order to get here, but a very tricky task awaits him as he faces a very in form Michael Holt. The winner of this will play either Shoot-Out Champion Robin Hull (who beat Williams in Round 1) or Paul Hunter Classic finalist Tom Ford.

Fu is paired with Andrew Higginson, and Trump plays Ben Woollaston. Trump beat Woollaston 5-0 during the Shanghai Masters First Round only a few weeks ago.

O'Sullivan has been patchy on his return to the professional circuit having been away for nearly five months. The organisers would have breathed a sigh of relief when he got the better of Lyu despite dropping the first frame.

It won't be easy for The Rocket here. If he gets past Wells, he will play David Gilbert, a player who has seen his stock considerably rise over the last 12 months. O'Sullivan enters this series of tournaments under some pressure in regards his ranking position; he is soon to have a huge chunk of his total points removed due his 2014 UK Championship win falling outside of the two year rolling system.

Shaun Murphy compiled a sensational 147 maximum break in qualifying, he will tackle Mark Davis, who had three centuries in his two matches.

​Just Neil Robertson and Ali Carter of the World's elite appear in the bottom quarter of the drawsheet.

In a re-run of the 2010 World Championship final, Robertson meets Graeme Dott, who secured qualification courtesy of a 54 clearance on the final black in his deciding frame against Mark Joyce in the Last 64. The winner will move on to play either David Grace or Rhys Clark.

UK Championship semi-finalist Grace upset Joe Perry in Preston, while Scotland's Clark, who defeated Alex Borg then Peter Lines at the Guild Hall, has made the Last 32 of a ranking event for only his second time.

Major winners on the circuit this season already, it's World Open champion Carter v Indian Open champion Anthony McGill in what should be a really classy affair.

Written and published by Michael Day on the 2nd October 2016