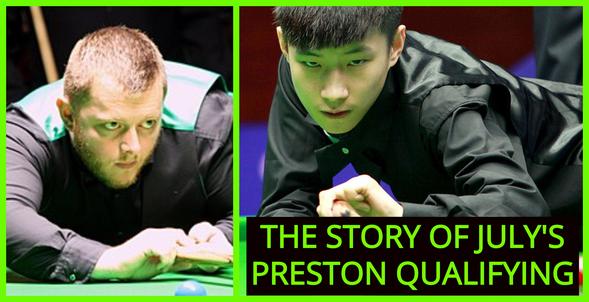 THE STORY OF JULY'S PRESTON QUALIFYING

Whilst a lot of the UK may have been enjoying the World Cup and/or the prolonged heatwave (come on England and roll on Autumn), casual snooker fans might have missed out on the recent qualifying double-header from Preston's Guild Hall for the Riga Masters and World Open, which got the new 2018/19 professional campaign underway.

Unsurprisingly, a few of the sport's top names elected to give these early season events a miss, although only Ronnie O'Sullivan and John Higgins will not play a part in either of them.

For those elite players who did have to travel to Preston there was mixed results, most notably involving Stuart Bingham who dipped out on both Riga and Yushan after losing 4-0 to Niu Zhuang and 5-4 to Zhang Anda.

Shaun Murphy and Anthony McGill will both miss trips to China next month too because of defeats to Mei Xi Wen (4-5) and Lee Walker (1-5) respectively.

On the other end of the scale Ali Carter recorded 4-0 and 5-0 wins (over Billy Joe Castle & Basem Eltahhan) to stamp his passport, whilst Judd Trump, who did not enter the Riga Masters, scored well during a 5-0 World Open success against Kishan Hirani.

Mark Allen was very impressive during his double last week in Lancashire. The Masters Champion chalked up five breaks of 62 or above against Daniel Wells (4-2) and runs of 56, 87, 93 and 102 when eliminating Peter Lines (5-2). The Northern Irishman's power scoring has been a familiar feature in recent times and you would think another ranking title is just around the corner - his last was over two years ago at the 2016 Players Championship.

Marco Fu was severely hampered last year with an eye complaint, missing several tournaments and being unable to compete to the best of his ability in others. However, Hong Kong's number 1 has made a positive start to the 2018/19 campaign with wins over Elliot Slessor (4-1) and Chris Totten (5-0). Having accumulated very little in the way of prize money last season, Fu has a lot of ranking points to defend from two years ago (arguable his most successful season, ever) and he will have a monumental task of maintaining his position.

World Number 1 Mark Selby survived a sticky spell during his World Open qualifier with amateur top-up player Luke Simmonds where he trailed 3-1 before returning from the mid-session interval and winning four frames on the spin.

Fellow Snooker Bloggers have been having their say regards players to watch out for during the new campaign. Players commonly mentioned were Jack Lisowski, Yan Bingtao, Zhou Yuelong and Chris Wakelin, all of whom will feature at venue stages in both Latvia and China.

Exciting young prospect Zhao Xintong was relegated from the top tier last season but bounced back immediately when qualifying from Q-School. The 21-year-old Chinese cueist recorded victories over Jimmy Robertson (4-0) and 2006 World Champion Graeme Dott (5-3) to kick this season off very well.

Zhao has shown us glimpses of his promise and natural ability, but ultimately he was unable to achieve a level of consistency over two years. In similar fashion to that of his fellow countryman Lyu Haotian, perhaps his second stint on tour will prove more fruitful.

Rod Lawler, who is now into his 29th season as a professional, wrote a bright opening chapter for himself with success against Martin O'Donnell (4-0) and then Mark King (5-4). A former PTC event winner, Lawler won just five matches throughout the entire 2017/18 term (two of those coming in the one-frame Shoot-Out).

​Robbie Williams done his nerves a world of good with consecutive deciding frame wins over Alan McManus and Oliver Lines.

Professional rookies Ashley Carty, Simon Lichtenberg and Harvey Chandler have all taken pressure off themselves following victories which have earned them prize money.

As expected for summertime Snooker, not all the professionals entered both events, therefore amateur top-up players were invited to fill up the vacant spaces. David Lilley made the most of his opportunities by booking trips to both Riga and Yushan, whilst former Crucible qualifier Simon Bedford and the previously mentioned Simmonds will also be in Riga. Bedford turned a 3-0 deficit into a 4-3 against Mike Dunn.

The first trophy of the season will be lifted in Latvia at the end of this month with action running between the 27th to the 29th.

The image of Zhao Xintong above is courtesy of World Snooker.