THOMPSON TRIUMPHS AT THE 2019 FOREST OF DEAN OPEN

Players of varying abilities and from different disciplines featured in this unique World Rules event that took place across two separate dates and venues.

The opening phase of the tournament, hosted by Oaklands Sports Bar, focused on a double elimination format to whittle down and find 16 qualifiers for the following week's 'Finals Day' that was being showcased at the Drybrook Sports Bar.

Thompson, winner of several established titles and a 2014 World Masters finalist, opened his campaign with victories over Andy Slack (6-1) and Tom Bollen (6-4).

Thompson was then defeated by EBA Nations Cup Under 23 Champion Cole Bedford, 6-3, in the Winners' Qualification round, but he instantly recovered with a 5-0 success against Martin Ray to book his berth for the single elimination portion seven days later.​

His opponent in the final was Nick Bell, who like Thompson, reached the final of the World Masters in Blackpool, two years on from when he did. Both were only halted by one of English 8 Ball Pool's all-time greats, Phil Harrison, in those finals.

The comparisons didn't end there, either. Bell navigated his first two assignments at Oaklands but was forced to advance via the Losers' Side with a 5-3 win over Rich Mallard.

​At Drybrook Bell dispatched Bedford (10-2), Neil Brittain (10-7) and then exercised revenge by ending the hopes of Macauley Gunn, 11-4, in the Last 4. Gunn was the player who had pushed Bell to the Losers' Side the week before.

After the opening quartet of frames in the final were shared, Thompson chalked up three in a row to claim a 5-2 lead. He later held three frame advantages at 6-3 and 7-4, too.

However, affairs altered when Bell dug in to level the match at 8-8, and then took the front for the first time in the tie at 9-8.

Having won five of the previous six frames, momentum was firmly with Bell in the best of 21 encounter, but Thompson wasn't to be denied as he produced some beautiful Pool to string the next three for an 11-9 victory to take the title, trophy and £750.

It was a topsy-turvy, quality and exciting final that was a fitting climax for an excellent event.

To view matches that were live streamed by Beard Productions from the Last 16 onwards, please click here.

To see the full results from the 2019 Forest Of Dean Open, please click here.​​​ 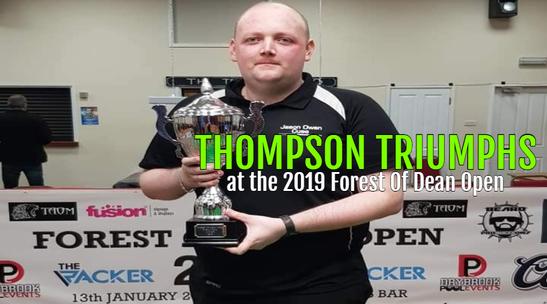