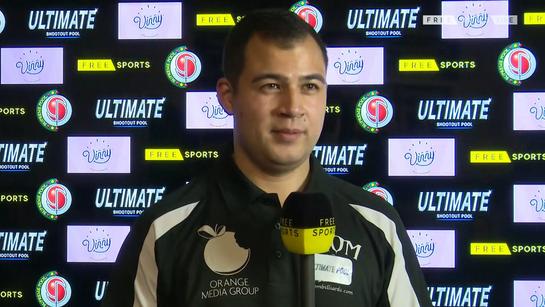 Storry began the night as the group favourite and was returning to the Players Pool and Snooker Lounge venue in Newcastle-under-Lyme with happy memories having achieved success there before.

An all-Suffolk affair started the night off as Ipswich’s Storry managed a 2-2 draw against Sudbury’s Chris Day by break and clearing in frame four after Day had initially committed a foul break in the same frame.

The other two cueists in the group were former WEPF World Championship semi-finalists Tom Price and Eddie Barker. Welshman Price took the lead twice but Barker responded each time, however, a break and clearance in frame five from Price secured him the two points as the 20-minute match clock soon expired.

Barker stayed on the table next, but despite taking the opening frame, it was former Bulldog Security Challenge champion Storry who ran out a 4-1 winner. The same scoreline occurred at the end of an action packed and thoroughly entertaining tie between Price and Day, with former England WEPF world team championship winning member Day finishing impressively.

Going into the final set of fixtures there were several permutations still possible. The only player who could not qualify was Barker, but he maintained pride as he picked up a point in a 2-2 draw with Day.

The result meant that Day, Price and Storry could all still win the group, although it was only the latter who could qualify without the need of a six red shootout tiebreaker.

Price got off to the ideal start as he punished Storry for snookering himself on the black in frame one, but the player nicknamed ‘Autopilot’ rerouted, producing some fine finishing under pressure to record a 4-1 victory and top the table with five points.