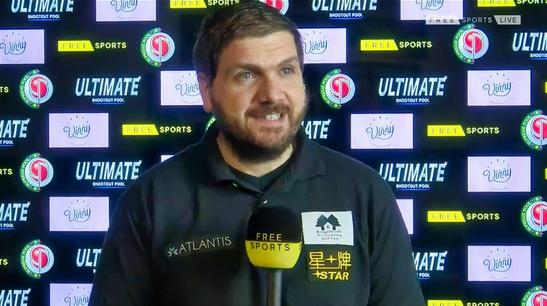 Despite not being at his commanding best, group favourite Hill went undefeated to finish top and qualify for the next phase of this unique competition. He joins Josh Kane, Aaron Davies, Phil Harrison, Neil Raybone, Shaun Storry, David McNamara and Chris Melling in the last eight, all of whom are still in with a chance of claiming the title and a £10,000 payday.

Dubbed by many as ‘The Group of Death’ due to the accolades of the cast on show, the night in Newcastle-under-Lyme began with a bang when Declan Brennan 'produced' the first ever ‘Golden Duck’ on TV – potting both the black and cue ball on his break, meaning he forfeited the frame to opponent Dylan Leary.

However, the current Liberty Games Open champion recovered from this early setback to defeat his fellow Northern Irishman 4-2 with a fine performance that included two reverse clearances.

All-time great Hill entered the fray next, but in a protracted affair with four-time world team champion Shane Thompson, he needed to conjure up a full-length double in the third frame to escape with a 2-1 victory as the twenty-minute match clock expired.

Thompson stayed on the baize to face Leary next and he showed his class in recording a 4-2 success with two break clearances and two reverse clearances. Leary – the 2019 EEPF European Champion – was now eliminated despite doing precious little wrong in his two outings.

In the biggest match of the evening so far, opening game winners Brennan and Hill crossed cues in a pivotal encounter. After the first four frames were shared, the tie was heading towards a 2-2 draw, but Brennan’s elected finish was thwarted and Hill made sure of the clearance whilst managing the remaining time left on the clock. With less than 30 seconds to go, Brennan was unable to respond on his break in the next frame.

Going into the final set of fixtures, both Brennan and Thompson could still qualify, although destiny was out of their hands. However, it was Brennan that kept his hopes alive with a 4-2 win.

Previous results meant that Hill required only a point against Leary to top the group and avoid a six red shootout with Brennan – but this task was far from easy.

Leary went 1-0 and 2-1 up, and just when it looked like Hill had the job done after taking the next two, Leary constructed a rapid break and clearance to leave the world champion sweating it out with less than two minutes left. However, after Hill potted a ball from his break in frame seven, the clock was his friend and the match ended in a 3-3 draw.

Written and published by Michael Day on the 15th February, 2021