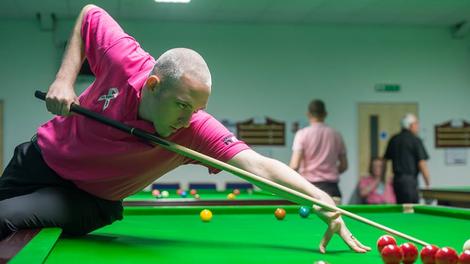 VJ - David, can you please tell me about your early days in snooker? What are your first recalls; how and when did you start to play?

DG - My first introduction to snooker was when I played on my father's small 5ft table aged around 6 or 7. I was too small to reach it but he made special small legs for the table so that my sister and I could reach properly.

For Christmas one year he got me a new small table which I had set up in my bedroom, even though there was barely room to get the cue in! I first played on a full size table just after my 10th birthday at the club where I still practise today, the Northern Snooker Centre in Leeds.

VJ - Who was your idol when you started to play? Is there any particular player that your are looking as your role model in snooker?

DG - I never focussed on one particular player growing up.

I enjoyed watching Ronnie O'Sullivan whilst admiring the winning mentality of Stephen Hendry, but mainly I would watch any snooker that was on television, I didn't mind who was playing.

Last campaign you also won three matches to qualify for the World Championship. Can you tell me something more about those experiences. How much did that impact on your confidence? Did you set any higher goals after that?

DG - The run at the 2015 UK Championship was beyond my wildest dreams, it was a very surreal experience.

Although I got to the Last 16 of the Shanghai Masters, with the UK being the 2nd biggest tournament it felt like everything from the Last 16 onwards was new territory.

I had played on television before on Eurosport, but having grown up watching the biggest events on the BBC it was always a dream to play live on BBC TV with the famous commentators and everything that goes with it.

I managed to beat Peter Ebdon and then when I came from 5-1 down to beat Martin Gould in the Quarters I was in total shock. My previous highest win was £8,000 for Shanghai and now I was guaranteed £30,000 and had pretty much saved my Tour Card by reaching the top 64 in the rankings for the first time.

Reaching the Crucible was also a very special experience. I had never been close to qualifying before but always wanted to play there. There are many professionals who have never played there and it would have been one of my big regrets had I never played there, so I really wanted to tick that one off the list.

VJ Do you/what are your expectations from this season?

DG - My goal for this season is just to stay in the Top 64. I have my £30,000 from the UK Championship coming off my ranking total this season, so it will be difficult, but if I can manage it I will be delighted.

VJ - If you didn’t become a snooker player, what would you do? Any other sport maybe?

DG - I have no idea what I would have done if I was not a snooker player, it's all I ever wanted to do as soon as I fell in love with the game.

I have done some portrait painting in the past but as soon as I started doing better on the Tour I have not found the time to keep it up recently.

VJ - Do you have any hobbies? How do you relax and what do you do in your free time?

DG - I tend to spend my spare time with my wife Gemma just at home, as we bought our first house together last year.

We like cooking and eating out but we are careful with what we eat as we are Slimming World Members. I never thought I would be able to lose weight but I've managed to lose 6 stones since starting last year.

VJ - If you could change one thing in snooker, what would it be?

DG - I try not to get involved in snooker politics; I think Barry Hearn has saved the game and it is growing worldwide year by year, so I just let them get on with it and I trust them to make the best decision for the good of the game, not myself or any individual players.

Vladimir would like to thank David for his time in going ahead with this interview. We both appreciate it a lot, and would like to wish him luck moving forwards!