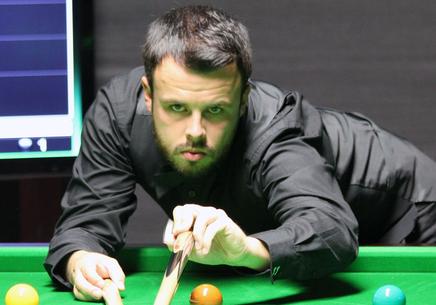 Vladimir narrates and asks the questions...

John told me about his beginnings in the sport and I asked whether anyone inspired him to take up the sport...

“I started playing snooker when I was 12. My oldest brother took me to the local snooker club and I started playing pool at first, then after a few weeks I asked if we could try snooker. I remember the first time I played and the table looked huge!

At the time I was playing football for a local junior team but as time went on I wanted to play more snooker and stopped playing football. I didn't have a influence from anyone to start with, I just really enjoyed it and after a few months decided I wanted to get coaching and see how good I could get.”

John says that his idol in snooker was Stephen Hendry when he started to play, but there was another great player he also looked up to...

“When I started playing my idol was Stephen Hendry. I used to watch a lot of his videos then I would go to the club to try and play like him.

One of my other role models was Paul Hunter and I actually had the chance to practise with him for the day once when I was about 14 years old.”

​In the 2013/14 season John earned the Rookie of the Year award. He had some great performances that year, like defeating Ken Doherty at the UK Championship, but next season he dropped off the tour...

"It was a great confidence boost winning the Rookie of the Year and a great honour to receive it.

When I dropped off the tour the following season I mainly put it down to still being a bit inexperienced at that level, but it is also very difficult to just retain your tour card.

I never really had doubts in my ability - I just needed more experience."

John’s main goal for this season is to get into the Top 64 and to retain his tour card, although he is taking each match as it comes...

“I don't really have too many expectations in the next few tournaments, I just take each match as it comes and try to perform to the best I can, then I will have a good chance of beating anybody.

My main goal for the season is just to get into the top 64 of the rankings so I retain my tour card but aside from that I would love to qualify and play at the Crucible for the World Championship.”

His favourite sport beside snooker is golf. He enjoys playing it, whenever he has time, but he also sees himself as a snooker coach. He likes to listen to music and spend time with his fiancé...

“If I wasn't a snooker player I would have liked to maybe have been a pro golfer as this is one of my favourite hobbies.

In regards to other jobs, maybe teaching snooker or other sports. I actually already do snooker coaching in my local club, but I'm a big fan of a lot of sports.”

If he could change one thing in snooker, it would be...

“One thing I would probably change about snooker is to relax the dress code in some events.”

Vladimir would like to thank John for his time in going ahead with this interview. We both appreciate it a lot, and would like to wish him luck moving forwards!