Joel Walker claimed his maiden Challenge Tour title on Sunday evening at the Metrodome in Barnsley.

The former Q-School graduate and Welsh Open Quarter-Finalist traveled to the seventh leg of this second-tier tour ranked joint 18th on the Order of Merit. His previous best this season was a Last 8 finish at Event 1 in Burton; he comfortably surpassed that in South Yorkshire.

The 24-year-old narrowly defeated Joshua Cooper 3-2 in the opening round before eliminating Matthew Glasby 3-1 in the Last 32 to book his place for the second and final day.

Returning Sunday he had to hold his nerves on more than one occasion when eventually seeing off France's Brian Ochoiski, Leo Fernandez and then Event 3 winner Barry Pinches, all via deciding frames.

In an all-English climax he faced fellow debut finalist 17-year-old Jenson Kendrick, who had surprised some with a run which included victories over Kevin Van Hove (Belgium) 3-0 in the Quarters and Event 1 champion Brandon Sargeant 3-1 in the Semis.

However, Walker denied the teenager the trophy as he confirmed a 3-0 final success to secure the glory. The £2,000 he banks pushes him up into fifth on the rankings list with £2,950 in total.

​Despite a Last 32 exit at the hands of Fernandez, multiple tour victor David Grace holds onto top spot with £5,650. Possession of the second promotion place did change hands, though, as Sargeant jumped Event 4 conquerer Mitchell Mann (who lost in the Last 32 to Sydney Wilson).

Barry Pinches remains in fourth, whilst a Quarter-Final outing for Event 5 champion David Lilley keeps him in sixth.

There are just three more events of the Challenge Tour campaign. The next leg will take place at the end of November in Hungary.

​To view all of this weekend's results,please visit snooker.org here.

The image above is courtesy of World Snooker 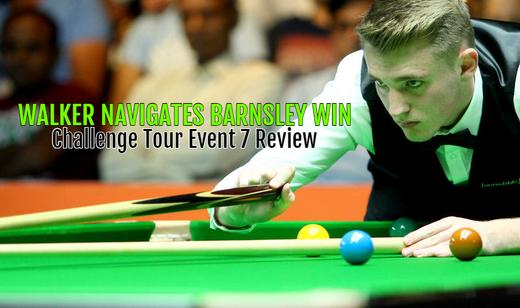