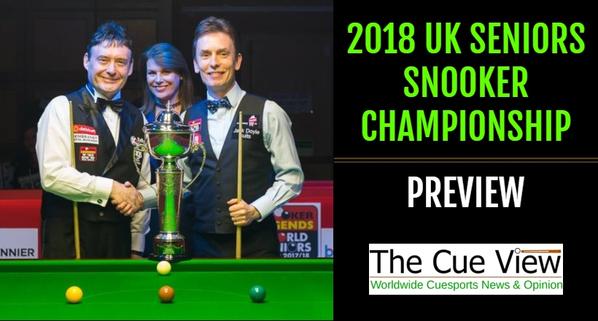 ​A cosmopolitan competition that features players from four different continents, the 2018 UK Seniors Snooker Championship takes place across Wednesday and Thursday at the Bonus Arena in Hull.

Jimmy White won last year’s inaugural edition in Redhill after defeating Ken Doherty in the final. The Whirlwind will be trying to retain the title against fellow major winners and legends of the sport, who are joined by UK and international qualifiers in the twelve-player draw.

Alongside White, 1997 World Champion Doherty, 7-times World Champion Stephen Hendry and current World Seniors Champion Aaron Canavan are the seeded players for this two-day spectacle that will be broadcast live on FreeSports TV. These four await the winners from the First-Round in the Quarter-Finals.

1985 World Champion Dennis Taylor will face Thailand’s Suchakree Poomjang, who emerged from a qualifying event in Hong Kong last month. The winner will face White in the Last 8.

Elsewhere in the top half of the draw, Canada’s 1980 World Champion and reigning World Seniors Masters Champion Cliff Thorburn begins his campaign against Rodney Goggins; the last player remaining from the Clacton-on-sea qualifier. Should Goggins progress, it would set up an all-Irish clash with Doherty, although The Grinder will be looking to spoil that occasion.

Looking for his first title on the Seniors tour, 1991 World and UK Champion John Parrott, will meet the final qualifier to book his spot in Hull, Leo Fernandez, in the bottom half. Hendry, who struggled for results during the 2017/18 term, waits in the wings for the winner.

The final quarter of the draw pitches together 1986 World Champion Joe Johnson and Brazil’s Igor Figueriedo, who qualified by virtue of his victory at the WSF Seniors Championship in Malta earlier this year. World Champ Canavan will cross cues with the victor.

All four of the qualifiers in Hull have been professionals in the past, although this will be their main stage World Seniors debuts.

All matches up to and including the Semi-Finals are the best of 5 frames, although should a match reach 2-2, it will then be decided by a re-spotted black. The final is the best of 7 frames, and again has the tie-breaker stipulation in place.


Image above is courtesy of Monique Limbos