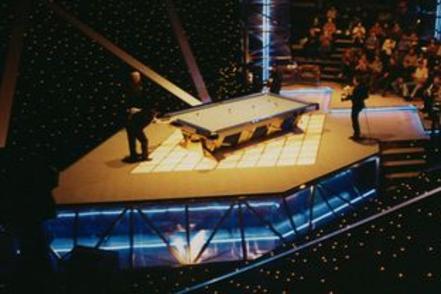 Despite riveting endorsements from the players and a slogan of 'The new snooker game that is sweeping the country', it's safe to say that Tenball never took off.

Without wishing to confuse our friends from the American Pool discipline, Tenball was a dramatic variation of snooker, although in many ways it was designed as a hybrid of Snooker and 9 Ball Pool. Steve Davis even bravely labelled it as 'the ultimate cue game'.

Tenball was devised by a managment team although Barry Hearn would get involved with the promotion and razzmataz of the show, whilst Davis refined and settled on the rules.

The first ever (and as it happened, only) Tenball Championship tournament was played in 1995. This was an event featuring eight players who had been invited. Although the discipline would be a flop, the actual cast was star-spangaled. Ronnie ..

It was a knock-out event with each match the Best of 5 frames. LWT recorded the programme for ITV, although many of ITV's regional stations chose not to air it. The series was 7 package programmes of 45 minutes - one for each match.

Interestingly, I found out they were aired between the 8th April and the 20th May, were they trying to compete and/or cash in on the World Chapionship coverage the BBC were showing in the middle of it?