The teenager continues to win awards on the international circuit - earlier this year in China she defended the IBSF Women's World Under 21 Championship.​ Here she eliminated Floriza Andal (Philippines) 4-2 and Ka Kai Wan (Hong Kong) 4-1 in the Quarter and Semi-Finals respectively.

On route to the Final Sukritthanes was impressive in getting the better of Hyemin Choi (South Korea) 4-0 in the Preliminary Round, Vidya Pillai (India) 4-1 in the Last 8 and current WLBS World Champion Ng On Yee (Hong Kong) in the Last 4; Pillai had lost to Ng in that World Final in Singapore.

​23 year old Sukritthanes constructed a 60 break in her opener, and a quartet of 30 plus efforts against Ng.

However, the Gold Medal encounter was a one sided result, with the younger of the pair recording a 4-0 victory.

Elsewhere in the Snooker programme, the Men's Team Final on Sunday will be contested between Iran and Qatar.

​The Iranian trio of Hossein Vafaei, Soheil Vahedi and Amir Sarkhsoh made the Final after wins over South Korea 3-0, India 3-2 and then Afghanistan 3-1 in the Semis.

Qatar upset arguably the favourites, China, 3-1 in the other Semi-Final tie. The team made up of former professional Ahmad Saif, Ali Nasser Al Obaidli and Khamis Nasser Al Obaid also had wins over host nation Turkmenistan (3-0, First Round) and a strong looking Thailand team made up of ex-main tour players Issara Kachaiwong and Thanawat Tirapongpaiboon (3-2, Quarter-Finals).

The above picture is courtesy of Daphne Leong.


Written and published by Michael Day on the 23nd September 2017 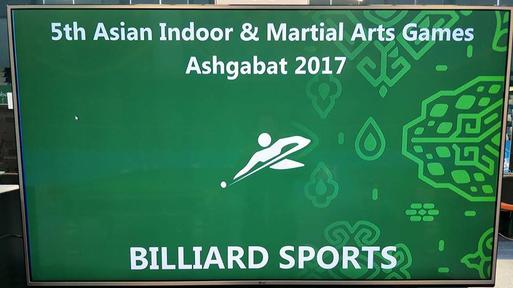