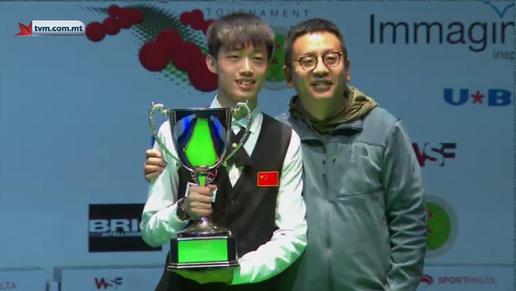 Luo Honghao is the inaugural winner of the World Snooker Federation Championship; the most prestigious title outside of the professional game. The Chinese teenager banks 10,000 Euros and a guaranteed minimum of two seasons on the sport's top tier.

90 players from five continents began this historic Mixed Gender event at the plush Dolmen Hotel in Malta. After six days of Round Robin and Knock-Out action where hundreds of frames were completed, the final drew together two youngsters with the combined age of just 42.

18-year-old Luo came into this tournament as one of the favourites having reached the World Under 21 Championship final last year. His campaign here started with routine qualification from Group E where he won all four of his fixtures with the loss of just three frames.

In the KOs he eliminated four players from four different countries to reach the final. He comfortably dispatched Jason Peplow (Malta), Thomas Dowling (Republic of Ireland) and Jamie Clarke (Wales) - all by 4-0 scorelines in the Last 32, 16 and 8 respectively.

However, his Semi-Final tie against former European Under 21 Champion Kacper Filipiak (Poland) took a very different narrative in front of the live TV cameras. Breaks of 76 and 59 helped Luo establish a 2-1 lead, but a brace of frames from Filipiak put him on the hill. The Asian cueist showed spirited qualities, though, forcing a deciding frame when taking the sixth and then holding his nerve in the seventh, although he was aided by a fluke on the last red.

Luo's opponent in the final was another Pole in the form of top seed Adam Stefanów, who initially advanced from the Groups without dropping a frame.

With so much at stake, the Best-of-11 final understandably began scrappy as both tried to gain a foothold. Luo forged a 2-0 profit and then extended his lead after a lengthy third frame. An 87 clearance in the next meant he took a 4-0 advantage into the second session.

On the resumption, Luo continued to dominate - a 54 clearance put him one away. Negative thoughts of how he let slip last year's World Under 21s final did not emerge, as he finished off the match to win 6-0.

The victory for Luo means he will join the seemingly ever expanding Chinese contingent on the professional circuit next season, however he, Stefanów, Filipiak and Helgason, will all be part of World Professional Championship Qualifying next month in Sheffield -  an additional bonus for those who made the Last 4. ​

Figueiredo made the event's highest break with a 131 during the Group Phase.