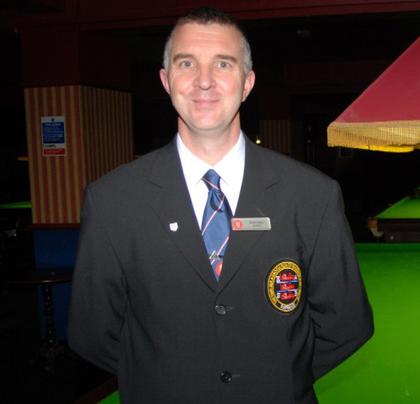 Nick Harry is one of the professional snooker circuit's top up and coming referees. An accomplished player himself with a deep love for the sport, Nick has quickly risen up through the amateur ranks and next week will take charge during the inaugural English Open. We caught up with him before he travels to Event City in Manchester...

​​TCV - Hi Nick, thank you for taking time out to speak to us here at The Cue View! I know you still play to a very good standard in the local league, but how did you discover your refereeing passion? What paths have you taken to progress, and what are your achievements with the white gloves so far?

​NH - I became interested in refereeing many years ago having watched a lot of snooker; the greats of course such as Reardon, Spencer, Alex Higgins and many more.

In terms of referees, Len Ganley, John Williams, Sydney Lee and of course John Street...many to look up to. Hopefully I can emulate their achievements and carry it on.

Regarding my path so far, I took my Class 3, then after nine months I was fast tracked into doing my Class 2 where I participated at the Home International Events.

I continued to gain experience on the amateur circuit doing as much refereeing as I could; travelling far and wide to do tournaments and exhibitions.

As well as being a part of the regional West of England Billiards and Snooker Foundation (WEBSF) scene, I also refereed at the Pink Ribbon Event two years running, which is a fantastic event in aid of Breast Cancer. In the second year I was asked to referee the final...this was a great honour, not only because of the occasion, but the fact it is a Pro-Am event too. The Final was between Joe Perry and Barry Hawkins; Joe won 4-3. It was an absolute joy for me, my first real introduction into refereeing top professionals.

I continued to referee everywhere I could and gain as much experience as possible, also for me to build up a database of players for who I was regularly refereeing in tournaments. I started to participate overseeing the Snookerbacker Tour Events which I done for four straight years. In that period I refereed two Semi-Finals and two Finals back to back. A massive big 'Thank You' to Tim and Sonia for their great support during these times for me as a referee.

​World Snooker contacted me regarding my assessment to become a professional referee. I had my assessment with Eirian Willimas who pushed me with everything - rules, table position and many more things that I had to learn.

I passed that assessment, and then I was given my first match to referee. I can not remember the players at the time, but in a four table match environment the refereeing schedule was; Table 1 -Leo Scullion, Table 2 - Jan Verhaas, Table 3 - Me!, Table 4 - Brendan Moore.

What an introduction! I was in awe refereeing alongside three of the World's top referees, and I wanted more of it.

Since then I've refereed at Q-School, European Tour events in Latvia and Germany, and Qualifying Rounds here in the UK. In February, I was involved in Cardiff for the venue stages of the Welsh Open. Only a few weeks ago I oversaw a Ronnie O'Sullivan exhibition in Cornwall.

As you can see, I am trying to progress to the best of my ability!

TCV - It's brilliant news about the role you have at next week's inaugural English Open! How are you feeling about the challenge ahead in Manchester?

NH - It is a great honour to be asked to referee at a new event.

Yes I am looking forward to it, although I don't feel it's a challenge, it's more of a personal viewing for the World Snooker Referees to assess you. As with all tournaments, you must always focus & discipline yourself at all times. This is what will help make you a better referee.

​TCV - Do you have a 'Match Day' regime? What equipment do have in your pockets / have to take with you for a match?

​NH - In regards to my match routine there are a couple of things I always do.

I make sure that I'm immaculate in my dress code. I believe if you look good, you will feel good in yourself.

In terms of equipment, I keep 2 pens in my pocket, a half crown coin, 3 ball markers and 2 pairs of white gloves.

​TCV - Knowing you personally, you are a very friendly and engaging character! Do you socialise with the other refs on tour (or locally)? Any referees you look up to? Do you have a mentor you would go to for advice?

NH - Yes I do interact with other referees...I feel you have to as it helps in small ways. Listening to advice is also important, it makes you feel that you belong in the know.

In regards to mentors there are many, but I would like to give a massive 'Thank You' in particular to Greg Coniglio and Ben Williams.

​TCV - Now a bit of a scary one! What would be your ultimate refereeing nightmare?

​NH - I suppose there could be a couple of real nightmare situations!

I should imagine the worst case scenario would be if you, when spotting the pink ball, drop the pink into a big pack of reds! Balls everywhere! Would be even worse in front of a big audience and on live TV!

​TCV - Now you are about to reach another milestone in your refereeing career, what are your short and long term ambitions within the sport?

​NH - I will continue to work hard and want to learn as much as I can.

I want to become the best referee from my home town and maybe, one day, referee at the World Championship. The Crucible would be a dream!

I would also like to say a massive big 'Thank You' to all my friends and family for your support!

The Cue View would like to thank Nick again for his time, we wish him all the best for the English Open. He is such a nice and genuine person who deserves the limelight next week!

Nick is available for matches and exhibitions. Please contact him via his email address for more details - nickharry2012@gmail.com, or contact us here for other methods you can reach him at.

Written and published by Michael Day on the 8th October 2016
​