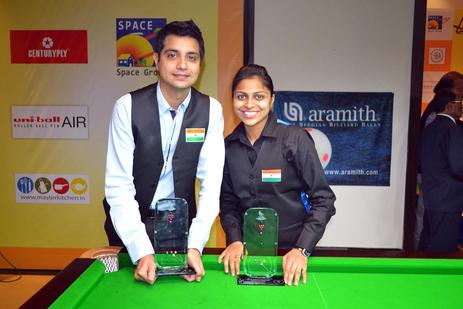 Chawla was successful in the 170 entrant Men's division; his first national title after a number of final defeats in the past.

The competition was played in three different stages - Double Elimination Qualifying, Main Stages Round Robin and the 32 Player Knockouts.

The pre-tournament favourites navigated their way into the KO's, although reigning champion Varun Madan fell to Ishpreet Chandra 5-3 in the Last 32.

Chawla comfortably made his way through the group phase after winning all three matches.

He would have a more taxing time in the knockouts, surviving deciding frame finishes against J. Varun Kumar and Malkeet Singh in the Last 32 and Quarter-Finals respectively.

In the final he faced the experienced Manan Chandra, who had earlier knocked out India's only current professional Aditya Mehta in the semi-finals 6-4.

In an exciting championship match, both finalists had the initiative throughout.

Chawla held the early upper hand to lead 3-1, but Chandra went on a four frame winning streak to go 5-3 up.

The eventual winner then won a hat-trick of frames of his own, before Chandra forced it to the wire.

However, after a 3 hour plus epic, Chawla held his nerve to claim his maiden crown at this level.

Kamani dethroned outgoing champion Vidya Pillai 3-1 in the final, after mapping her way through the double elimination and Last 8 knockouts.

Written and published by Michael Day on the 8th January 2016