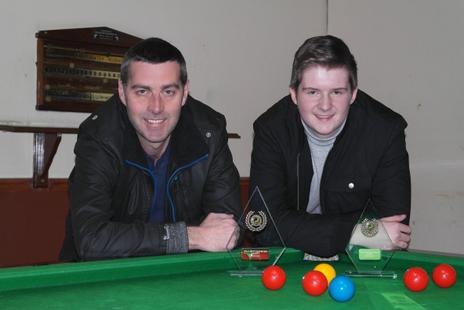 STANDEN CLOSES IN ON TOP THREE

​Paul Standen (above, left) from North Devon battled through no less than seven deciding frame matches on his way to winning the latest event of the West of England Billiards & Snooker Foundation (WEBSF) Gold Waistcoat Snooker tour. His opponent in the final was young Plymouthian Dan Legassick (above, right) who dropped just three frames on his way to the final. After a close first frame in the final that went Standen’s way Legassick had a bad contact on the brown in frame two which let in Standen to take the frame, trophy and prize money. In the semi-finals Legassick battled it out to halt an excellent run by home player Jake Stewart. In the other semi-final Standen also came through an equally tough match against fellow Devonian Darren Horsman. The quarter finals saw four former event winners fall by the wayside; Andy Neck (Newton Abott) to Stewart; Wayne Branton (Plymouth) to Legassick; Steve Downing (Redruth) to Horsman and Haydon Pinhey (Plymouth) to Standen. The best breaks of the knock-out stages came from Standen 51, Stewart 55, Legassic 82 & Pinhey 83. With the ranking table front runners Andy Symons (Tavistock) and Andy Rogers (Wales) failing to qualify for the knock-out stage, the door was left open for the following pack to close the gap. This they duly did and there is now a three way tie at the top between Symons, Rogers & Pinhey on 133, closely followed by Horsman and Standen on 131 and 128 respectively.

In the preceding knock-out stages two players from each of four groups qualified. In group A, Neck came through undefeated to take first place with Horsman just edging out Callum Lloyd (Wales) for second place. Group breaks: Johnny Watters (Tavistock) 58, Neck 50, Horsman 55 and Dale Branton (Plymouth) 56. Legassick was unstoppable in group B, like Neck he was undefeated, his best break being a 69. Second place was taken by Pinhey with a 56 break. Other group breaks: Harvey Chandler (Rushden) 61 and Rogers 61, 52, 51 & 50. Downing won group C posting a 61 break with Stewart in second place. Other group breaks: Darran Lock (Seaton, Cornwall) 54, Symons 77, 55 & 51 and Steve Brookshaw 54. Eddie Manning never fails to entertain and did not disappoint on the day with runs of 60, 65, 66, 71 and the only century of the day a fine 102 to take the break prize. Standen won group D, edging Wayne Branton into second place by the narrowest of margins. Breaks came from Tom Kevern (Plymouth) 51 & 60, Matt Hulatt 61, Hassan Vassie (Gloucester) 52 & 57, Standen 67 and Branton 70.

WEBSF spokesman said, “The new ranking points system that was introduced this season is certainly having the desired effect, at the halfway stage no player is running away at the top. With three of the four semi-finalist never having won a Gold Waistcoat event it looked like there was going to be a new winners name on the event trophy. However, Paul Standen the only previous winner kept his head against an improved Darren Horsman and the quick-fire potting ability of Dan Legassick to win through for only his second Gold Waistcoat event win. This is the first time we’ve brought the tour to the 147 Snooker Club, Swindon, hopefully we will be able to return again later in the season. The next event is scheduled for February 20th at Jesters, Swindon”

Any player interested in entering WEBSF events should contact Steve Canniford, Mobile 07891940995 or visit http://www.websfsnooker.com or WEBSF Facebook. Thanks to the 147 Snooker Club, Swindon who sponsored this event.