​​The Asian Confederation of Billiard Sports (ACBS) recently held both their Continental 6 Reds and Team Snooker Championships on the Kish Island in Iran, with entrants from India, Pakistan, Iraq,  Hong Kong, Afghanistan, Sri Lanka, Qatar, Palestine, Syria and the host nation Iran taking part. However China and Thailand elected not to send representation.

6 reds is a form of snooker that seems to be enjoying continued popularity and success abroad.
Presumably along the lines of 20/20 cricket, the short format of the sport seems to be in high demand across Asia and the Middle East, whilst the conventional 15 red format was used in the team competition, where entries were made up of pairings involved in singles and doubles action.

The festival would be totally dominated by the home country, with distinct success in both disciplines.

In the 4th Asian 6 Reds Snooker Championship, it was an all Iranian lockout in the final with Soheil Vahedi beating Ehsan Heydarinejad 7-4.

It was an identical story in the team competition with Iran A (Vahedi and Amir Sarkhosh) defeating Iran B ( Heydarinejad and Ali Gharagozlou) 3-0.

It ended India’s reign as champions, after the subcontinent nation won the opening two team editions in 2013 & 2014.

Newly crowned Asian Snooker Champion Hamza Akbar (Pakistan) lost in the last 16 of the 6 reds to familiar fellow countryman Shahram Changezi, and whilst as part of Pakistan B, his team got eliminated in the semi-finals. 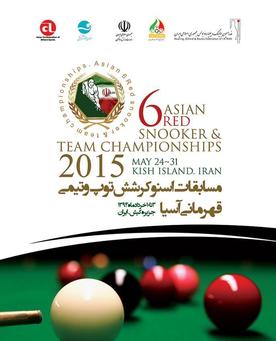