The continental title was sanctioned by the ACBS (Asian Confederation of Billiard Sports) and in conjuction with the host nations governing body; the Malaysian Snooker and Billiards Federation.

There was a very healthy turn out in numbers - 70 players from 22 different countries, once again demonstrating the growing popularity of the sport in the East.

In general however, it was the more established nations that were represented in the latter stages, after the initial 14 group round robin stage was completed.

In the last 24 though there was a significant shock, as one of the favourites to lift the title, Zhao Xintong of China, lost out to Putra Gebby of Indonesia 4-3. Xintong was the 2013 World Amateur finalist, and has had the nickname ‘The Wildcard Menace’ after a number of giant killing wins in Chinese Professional events.

Another player to be disappointed will have been Qatar’s Ahmed Saif, who has recently dropped off the professional circuit after relegation and was looking for an immediate return. A 2013 Q School graduate, Saif narrowly failed to qualify from his group - eventually losing out on frame difference.

Come the quarter finals stages and there were two ‘local derbies’.

Hamza defeated his fellow countryman Shehram Changezi 5-1, in which was a rerun of their National Championship final earlier this year.

The multi talented and successful Pankaj Advani won the all Indian match up after dispatching familiar rival Kamal Chawla 5-2.

China’s only remaining entrant Zhang Yong whitewashed Malaysian Lim Kok Leong 5-0,
leaving home hopes resting on the shoulders of Mohammad Reza, who advanced to the last 4 with a 5-1 win over Varun Madan (India). Thor Chuan Leong won this title last year; the third Malaysian to do so.

The semi finals were one sided affairs with Advani brushing aside Yong 6-0, whilst local interests were distinguished as Hamza beat Reza 6-2. This meant the final was an all subcontinent lockout - and it certainly didn’t disappoint. Both players were looking to win it for the first time, however Advani was a beaten finalist in 2004 and 2012.

In an epic contest which lasted a draining 7 hours, Hamza let 4-2 and 5-3 leads slip, allowing his opponent to take it to a decisive 13th frame.

Advani took initial control to lead by 30 points with only one red left on the table. But the Indian legend made a costly mistake, which would ultimatley allow the youngster the opportunity he needed to claim glory by winning 61 points to 52.

Along with the title and trophy, 22 year old Akbar also receives $7,000US in prize money, and a coveted two year professional tour card for the World Snooker circuit. He becomes the 3rd Pakistani to win the Continental Championship after Muhammad Yousaf in 1998 and Farhan Mirza in 1999.

After his win Hamza said :

“Unbelievable. Pankaj is one of the best players in Asia and I managed to beat him here. I, however, made things difficult. I led 4-2 and 5-3 but allowed Pankaj into the match”

“ My ambition is to become a World Champion. If my sponsor agrees, I will use the professional card for the UK tour this year”

Hopefully he will be able to compete on the Pro Tour as a permanent fixture, but by the sounds of it, he is dependant on financial support. It has been a while since a Pakistani has featured within the top rungs of the sport.

Results (from the last 16 stage onwards) 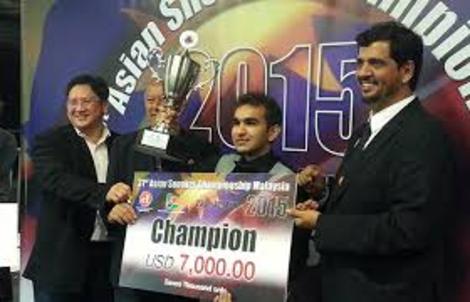