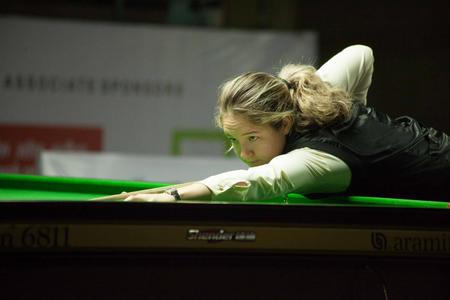 It also marks a successive hat trick for the talented youngster, after claiming the title here the previous two years, and it once again underlines her current dominance of the Oceania scene.

She started her bid this time around by qualifying top of the five woman Group A, with her only defeat being a narrow 2-1 loss to Kerry de Pradines.

But it was in the knockout stages where Woods really upped the tempo.

She made light work of Janine Rollings in the quarter final, before sealing a final berth with another clean sweep victory against Theresa Whitten in the last four.

In the championship match she would face Victorian, and close friend, Kathy Howden.

Despite the opening frames being shared, the champion once again turned the screw to run out a comfortable 4-1 winner.

Both Woods and Howden will represent Australia during the IBSF World Championships in Egypt come November.