​NO UPSETS AS WCOP ACTION CONTINUES

THERE were comfortable wins for seeded teams Poland, Chinese Taipei and Japan as action continued in East London in the first round of the Dafabet World Cup of Pool. The opening day had seen a host of upsets with Germany, China and Canada departing but everyone stuck to the script and survived to reach round two.

Chinese Taipei, one of the highly fancied teams here in London this week, overcame an Estonian team of Dennis Grabe and Erki Erm, winning by a 7-5 scoreline. Estonia took the opening rack before Erm missed an easy 9 ball to go 2-0 and allowed Ko Pin Yi and Chang Yu Lung to take four consecutive legs for a 4-1 lead.

The Estonian pair battled and enjoyed some fortune but in the end it was the Taiwanese who took the match 7-5. Ko and Chang certainly have the pedigree to become the first team from their nation to lift the World Cup and they should only improve from this performance as they look ahead to their second round match against Poland.

The impressive Polish duo of Mateusz Sniegocki and Wojciech Szewczyk recorded the first win of the second day’s play at the York Hall as they beat debutants New Zealand in a high quality match.

The Poles got off to a great start courtesy of a slice of luck as Sniegocki’s jump shot saw the 7 ball miss the intended pocket and then roll across the table to drop into the middle bag.
A couple of break and runs saw the score move to 3-0 and the New Zealand duo of Matt Edwards and Nick Pera were facing a bit of a mountain.

That became even steeper when the score moved to 5-0 but the All-Blacks battled back to take the next two. However, a scratch on the break handed the onus back to Poland who made it 6-2. New Zealand got to the table to claw one back but Poland closed it out for a 7-3 win and now faces Chinese Taipei in the next round.

Commented Szewczyk, “We played very well, I would say we played our A-game but we had to get familiar with the conditions so there were a few positional shots which were not perfect but I am sure we will get that right in the next match.

Sniegocki added, “We felt confident at 5-1 up but then New Zealand began to play very well and got two racks and the pressure which was there all through as the match grew. “

In the final match of the session seeded Japan had too much for Italy, running out 7-3 winners. Naoyuki Oi & Toru Kuribayashi are both veterans of the competition while the Italians were a bit short of experience.

The Japanese pair came with some great shots while Italy – Daniele Corrieri and Antonio Benvenuto – could not capitalise on some dry breaks from their opponents and showed some nerves. Japan now faces the winners of Holland and India. 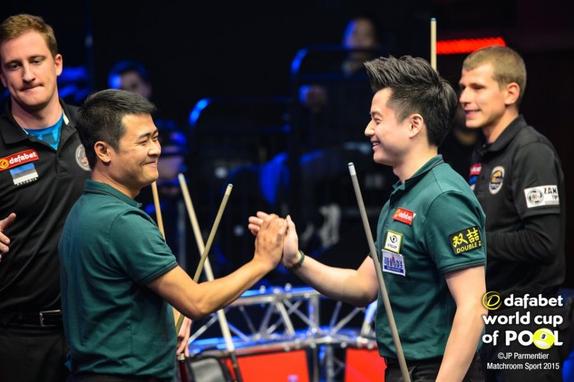