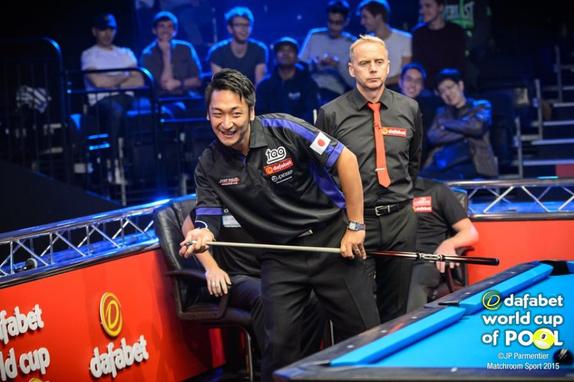 ENGLAND A AND JAPAN became the first two teams through to the quarter finals of the 2015 Dafabet World Cup of Pool as they enjoyed contrasting victories against Korea and Holland respectively. England A, closing the evening, trounced Korea in the only white-wash of the event so far while Japan won a fabulous hill-hill battle against the Dutch.

England can look forward to Romania or Indonesia in Saturday’s quarter finals while Japan face either Qatar or the Czech Republic. In the other match of the evening England B completed the first round of matches with a 7-4 win over Sweden.

Holland won’t be repeating their recent runs to the semi-finals of the World Cup of Pool as they lost a thrilling round two match, 7-6 to Japan. The Japanese team consisting of the flamboyant joker Naoyuki Oi and the more restrained Toru Kurabayashi seemed to enjoy every minute of it as they held off the highly fancied Niels Feijen and Nick van den Berg to squeeze out the win.

Japan lead 3-1, 5-3 and then 6-4 before Holland squared it up with Feijen breaking for the match. A loose break though saw the cue ball squirt into the centre pocket to give ball in hand to the Japanese.

With a 7/9 combo set perfectly, they worked their way through the balls until Kurabayashi came to the game ball. ‘9 ball! Can’t miss!’ shouted Oi which heaped the pressure on his partner but he steadied himself to seal a superb win.

Oi was delighted to reach his country’s third quarter-final in the ten years of the World Cup; “We are thrilled to get through! Holland is one of the best teams here and they gave us a very tough game but we came through.

“We like to have fun and make the crowd have fun and it is great to play to this audience. We want to carry on playing in this way and we believe we can win this World Cup.

“When I set up the 7/9, I knew Toru would not miss it and he didn’t. There were some big moments in that match but we took our chance when it came at hill-hill,” he added.

Karl Boyes and Darren Appleton charged through unchallenged as they battered Korea 7-0, finding form at the right time following an indifferent showing at the World 9 Ball Championship recently in Qatar.

Appleton said, “I never thought it would be that easy but they had a nightmare to be fair. They never played their game but we broke well and we’re happy to win. It was easy in the end but we really expected a tough game but that’s 9 ball.

“We feel at home here – this is the second best event after the Mosconi Cup and it’s one of the two or three events that you really want to win. It’s a short race that suits people who can play under pressure and we are the team to be feared!”

Boyes added, “I never doubted our doubles play but eight weeks ago Darren had some trouble with his neck and then mine went four weeks ago. I’ve not had much practice but in the arena and on live TV all form goes out the window. On paper we were looking at Germany or China but it’s Indonesia or Romania. They’ve both done well so far so that so that should be a good match tomorrow.”

In the final first round match, the England B side of Mark Gray and Daryl Peach overcame a stuttering start to defeat Sweden to earn the dubious pleasure of a second round match against the Philippines on Friday night. It is only the second time Peach and Gray have been paired together in the ten year history of the event and the last time in 2008, they reached the final only to lose to the USA pair of Morris and Van Boening.

The Swedish team of veteran Marcus Chamat and youngster Christian Sparrenloev Fischer had the better of the early exchanges to move into a 3-1 lead but England got on a roll to rattle off the next three to take a 4-3 lead which they maintained to run out 7-4 winners.

Gray said, “It is hard waiting while everybody else has played their first-round matches. We have been waiting a few days so it is good to get the win in tonight.

“The Philippines are No.2 seeds and as soon as you mention them you don’t really need to say much more. This year Biado and Kiamco look like a proper team whereas sometimes Philippines turn up and look like individuals. We watched them last night and we were very impressed. It was probably one of the best performances in round one and we know we have a tough game; we will have to improve.

Peach added, “It was a tough match, we knew we had a tough match with Sweden because they are fighters. We had to dig in deep and it was by no means the best we have ever played, we were probably only at about 30 percent but we held it together at the end and potted balls when it counted.

“Myself and Mark finished second the only time we have ever played in the World Cup together. We have the ball rolling now, we have Philippines next up who are as tough as it gets but they know they are up against it as well.”