DARRYL IS KING OF THE HILL IN MALTA

18 year old Darryl Hill has become the 2015 EBSA European Under 21’s Snooker Champion, with victory at the fantastic Dolmen Hotel resort on the coast of Malta.

Hill was born in Leeds, England, but now represents and lives on the small 80,000 populated island of the Isle of Man.

Not only did he take the prestigious title and 1,000 euro in prize money, but he becomes an EBSA nomination to compete and play as a professional on the World Snooker circuit for the next two years.

87 players started off on the small southern European island, initially being divided into round robin groups. There was a very continental feel to the event with a number of nationalities taking part - further evidence of snookers progression throughout the continent.

Hill came through unscathed in pool K with 4 out of 4 wins, and dropping only 3 frames in the process.

In the quarter finals he saw off Israel’s Shachar Ruberg 5-2 before facing a big test against promising German prospect Lukas Kleckers in the last 4.

Kleckers dominated the starting exchanges in the best of 9 match, making breaks of 52 and 82 in opening a 4-2 advantage. However Hill was not to be denied his place in the final, as he rallied to win the last three frames in coming through 5-4.

There he would face the talented Englishman Louis Heathcoate, who had been very impressive throughout the weeks action.

With so much at stake in the biggest match of their lives, the pair accustomed themselves well in sharing the opening four frames, with both making 70+ breaks.

The IOM competitor would take frame five with a run of 52, and then fashioned a clear advantage by winning frames six and seven.

Heathcoate, on the brink of defeat, made a 94 to close the gap to 5-3 - with six being the target.

Frame nine was yet more evidence of both players ability with ‘Hoover’ Heathcoate making a 63, only to see his opponent hold his nerve and assemble a 57, to take the all important win 6-3.

17 year old Heathcoate, who had previously ended the host nations hopes by defeating Maltese player Brian Cini 5-0 in the quarter-finals, walked away with 500 Euro, and his reputation significantly enhanced.

For Hill though, his dream of becoming professional is now a reality, and he will look to succeed 2014 U21’s Euro champ Oliver Lines who has had a very encouraging start to his career within the top echelons of the sport

The new champion dedicated his victory to former coach Mel Quinn who passed away 3 years ago. He told EBSA.tv - ‘Wherever he is, I ‘m sure he is smiling’.

This years competition was undoubtedly a roaring success with action being held live on Maltese TV and streamed over the internet.

In total 258 matches were played, and 1026 frames completed, in what was a truly youthful European festival of snooker. 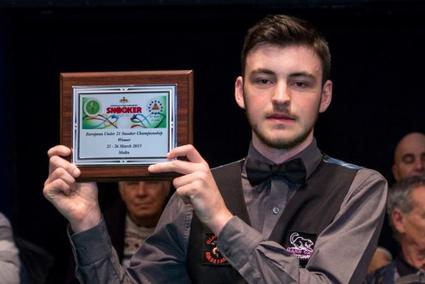