TAHTI AND DINSMORE IN THE GOLD

Tahti once again swelled his list of awards and accolades in these championships, taking career gold medals number 17 and 18.

First up, in the 10 Ball discipline, Tahti made the semi-finals unbeaten, where he then eliminated Great Britain’s Roy Kimberley 6-4.

In the final he would meet Belgian Kurt Deklerck, who came through from the losers side. Deklerck looked set to shock the Finn when he lead 4-2 and 5-3, but Tahti found another gear to win the last three racks for a 6-5 victory.

Tahti would double up in the last event of the festival - the 9 Ball division.

Again, he came through qualifying unscathed, and then resigned Dinsmore to the bronze with a 7-5 success in the Last 4.

Another Team GB representative, Tony Southern, would wait in the gold medal decider.

The pair would be locked at 3-3, but after an hour’s play this was deemed to be too slow by the tournament officials, who then placed the match on the clock.

This appeared to suit Tahti more, as he won four of the next five racks to taste yet more glory.

In between was the 8 Ball section, where Dinsmore had to come through the long way after a defeat in his second tie.

In the losers qualifier he ousted Kimberley 5-4, in the semi’s he survived the same fate over Deklerk, before beating Daniel Luton 5-2 for the top honour.

It is Dinsmore’s fifth European gold in the various events.

All pictures are courtesy of the EPBF 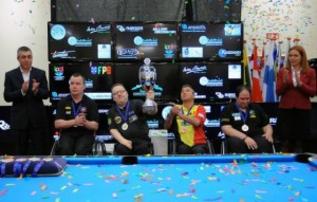 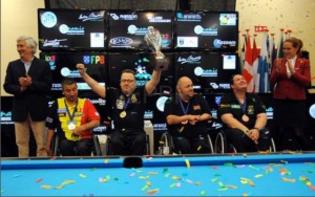 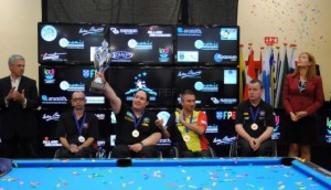