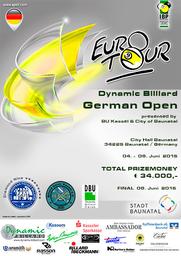 ​Petri Makkonen ticks off another career target after securing his first EuroTour success with victory at the 2015 German Open.

The Finn was the last of the 192 competitors standing after four days action at the Stadthalle Baunatal; a venue located in the centre of Germany.

Makkonen made his way through the standard double elimination process unbeaten to take his place in stage 2; the last 32 knockouts.

There he would survive a hill-hill thriller against Lithuania’s Pijus Labutis 9-8, before further wins over Nick Van Den Berg, Dennis Grabe and Florian Hammer.

In the championship match he would face fellow EuroTour final debutant Konrad Juszczyszyn of Poland.

Makkonen was not to be denied the win though; finishing up with a comprehensive 9-3 victory.

Petri Makkonen is a former World Cup of Pool champion when representing Finland in 2012. His previous best EuroTour result was bronze in Austria during 2013.