Team Bahrain had a brilliant Championships, finishing just one Gold behind the UAE 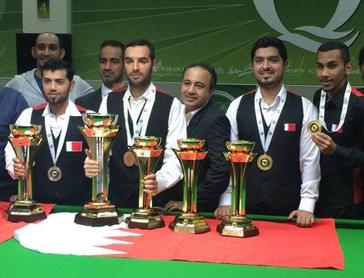 UAE AND BAHRAIN TAKE THE GOLDS

There were 5 different categories in the snooker section (Pool was also played), although players could only enter in a maximum of 2 of them.

It was a fantastic outcome for UAE and Bahrain, who claimed all the five gold medal positions between them - UAE taking 3, Bahrain 2.

Many thanks to Habib Subah for providing me with the photographs