Held in Saint Petersburg, Russia, the male division consisted of 74 entries from 18 different countries. As customary in IBSF events, the field was initially split into round robin groups, with players attempting to qualify for the Last 48 knockout stage.

As one of the top seeds, he advanced straight to the Last 32. There, he continued his bullish form with victories over the Indian trio of Mehul Saini (3-0), Kaavya Bharath (4-0) and Shrikrishna Suryanarayanan (4-1). Cheung then booked a final berth when dispatching Wales’ Dylan Emery 4-2.

Chan was similarly impressive during his long weeks work, although he did have to survive a deciding frame finish over another HK player in the form of Yun Fung Tam in the Quarter-Finals.

In the best of 9 championship match, Cheung started brightest, making breaks of 48 and 52 in taking a 3-0 lead.

Chan would eventually get a foothold in the tie with wins in frames 4 and 5 (48 break), although his younger opponent would return the favour, fashioning a run of 51 to close out the match 5-2.

Egypt’s Abdelrahman Shahin made the tournament’s highest break with an effort of 109.

Written and published by Michael Day on the 20th October 2015 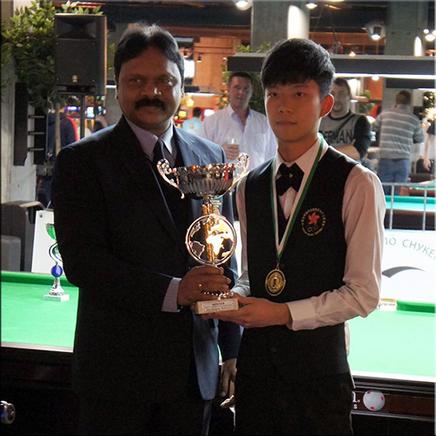