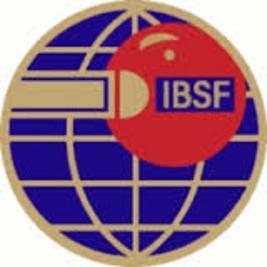 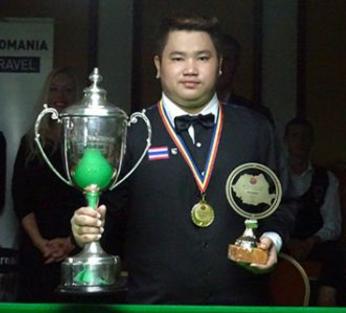 Boonyarit Keattikun of Thailand etched his name in history as he became the 2015 World Under 21's Snooker Champion in Romania.

He is the third player from the Asian country to own the title after Noppon Saengkham and Thanawat Tirapongpaiboon won in 2009 and 2011 respectively.

The 19 year old will also realise his professional ambition after being awarded a two year World Snooker tour card from the start of the 2016/2017 season.

104 players from 33 countries started out at the Hotel Caro in Bucharest looking to add their name on the 27 year roll of honour. Famous previous winners include Doherty, Ebdon, O'Sullivan, Robertson and Ding.

Entrants were split into 16 groups, with the top 4 then progressing into the last 64 knockouts.

Keattikun stated his intentions very clearly early on. He won all 6 round robin matches (best of 7's) with the loss of just a solitary frame. It not only assured him top spot from Group B, but also the number 1 seed going into the KO's.

He then dispatched Republic of Ireland's Aaron Moyles 4-2 and Luke Garland of England 5-1.

Australian and Oceania Under 21's Champion Ryan Thomerson provided a stiff test in the last 16, but Keattikun exhibited his nerve in coming through a ninth frame decider.

Chinese pre-tournament favourite Zhao Xintong was swept aside 6-2 in the quarters, before Boonyarit bettered that with a 7-0 victory over another player from China, Wang Yuchen, in the last 4.

Jamie Clarke of Wales would await in the final, a competitor of much stature on the global amateur snooker scene.

​Clarke has come very close to securing pro status in recent times, and would have probably started as odds on in most pundits minds I should imagine.

But it was Keattikun who started well, making a century break in the first frame of the best of 15 tie.

He continued to house an advantage throughout, stretching to a 7-4 lead, just one away from glory.

Despite a gallant comeback from Clarke who leveled it up at 7-7, Keattikun came through in frame 15, aided with a 53 break, to cross the finish line an 8-7 victor.

Yuchen and Josh Boileau, the 2014 runner-up, went home with the bronze medals.

Results (from the last 16 onwards)