CAPERNA GETS THE ITALIAN JOB DONE

The groundbreaking event was hosted by the Federation of Italian Billiards Sports (FIBIS) with 16 competitors (unfortunately 3 had to withdraw) duelling in straight knockout action on two tables. Players qualified through various regional championships, and, were ranked accordingly.

The top two seeds of Caperna and Gianmarco Tonini made the final. The pair are better known for their success and prowess on the pool table, but both exhibited some impressive cuesports versatility throughout the event. Tonini even made a 78 break; the highest of the tournament.

The opening six frames of the championship match were shared, but Tonini then took the lead for the first time in the tie when depositing the seventh. However, Caperna won the remaining three frames, including a run of 52 in the last, to finish a 6-4 winner. 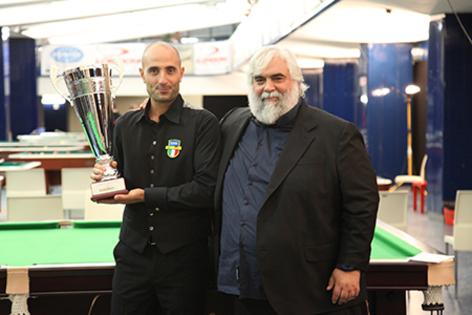