The 17 year old began his assault on the 10,000Euro 10 ball competition in the double elimination group stage. Despite an early loss in qualifying section E, Filler eventually confirmed a last 32 berth with a 6-3 victory over Spain’s Juan Carlos Exposito.

The main event final 32 stage was again a D.E. format, however this time only until the single knockout quarter finals.

Filler started well with a win over compatriot Can Salim, but was then again pushed to the last chance saloon by Englishman Imran Majid. The youngster regrouped though, and showed credible resolve in negotiating a further three matches, including a pair of deciding rack finishes, to make the last 8.

With perhaps momentum on his side he made light work of another fellow countryman Tobias Bongers 8-3 before extracting revenge on Majid in the semis during an 8-6 success.

As a former champion of this event back in 2013, home nation hope Van Den Berg was one of the six professional seeds who were automatically exempt from qualifying.

‘El Nino’ went straight through to the quarters with a trio of victories. He then survived an 8-7 encounter with French cueist Stephan Cohen, and in the last 4 beat the legendary Oliver Ortmann for the second time in the tournament, coming out on the right side of an 8-4 scoreline.

Filler was just too good in the final though, easing out an 8-3 winner.

There is more information and full results

Written by Michael Day, published on the 2nd September 2015 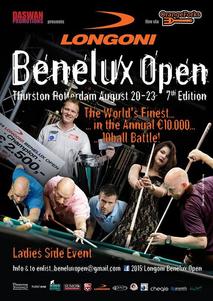