​​Mosconi Cup team mates Darren Appleton and Mark Gray both enjoyed first round wins at the 2015 PartyPoker World Pool Masters as first round play continued on Saturday afternoon at the Victoria Warehouse, Manchester.

In the opening match of the session, seeded player Waleed Majid took care of an out-of-sorts Daryl Peach (England) by an 8-4 score line. There were plenty of errors as each player gifted the other chances as the score moved to 3-3.

With ball in hand following Majid’s failed escape from a snooker, Peach messed up as he missed the 6 to hand the rack back. The Qatari though scratched on the break and from there Peach ran out for 3-3.

A miss from Peach allowed Waleed Majid to take the rack and four balls down off the next break set up another run out for a 5-3 lead. He took the next two to reach the hill at 7-3.

Peach was not quite done though and with a cluster of balls gathered around the corner pocket, Peach put Majid in a tight snooker. With the cue ball completely obscured, the Qatari failed to make contact. With ball in hand Peach did the same again before a third foul won him the frame.

That took the score to 7-4 and a scratch from Majid gave Peach another chance but he could not convert it and Waleed ran out to claim a solid victory. He now plays defending champion Shane Van Boening in the next round.

Commented Waleed, “I wasn’t enjoying the match because I didn’t play at my best in the opening few racks. I found my focus in the second half of the match and began to enjoy it a lot more. He made me miss three times to get to 7-4 so I had to be careful but took my chance in the next rack to win the match.

“Shane is defending champion and like everybody here is a strong player so I expect a very tough game and I will have to be very focused in that match. I’m looking forward to it but I know I won’t be able to give him any chances in the match because he will punish you.”

2014 Mosconi Cup winner Mark Gray (England) was the first unseeded player to win through as he beat well thought of Ko Pin Yi of Taiwan. The reigning World 10 Ball Champion made far too many mistakes against a player of Gray’s calibre who took his chances and looked solid throughout.

Gray’s snooker fundamentals stood up well in the early stages and he flew into a 4-2 lead. However, he scratched on his next break, which seemed to be an increasing pattern in the tournament.

Ko missed a tough 5 ball cueing off the rail in the next and Gray pounced on it to move into a 5-2 lead, and leave the Taiwanese looking shaky. A kick on the 1 ball in the next by Ko, saw the cue ball follow it in but a weak shot from Gray allowed Ko to get to 3-5.

There were more errors from the Taiwanese though as Gray won the next two to move to the hill at 7-3. Ko took the next two to keep himself in it but a 1/9 combination failed and Gray came to the table to polish off the match with a carom on the same two balls.

Gray analysed the match afterwards; “With the format of the break here, the referee racking with the triangle, you get a few more gaps. Ko is one of the best breakers in the world but a lot of tours around the world play with magic racks or tapped tables, which means all the balls are touching and you wouldn’t dry break. That probably helped me. He missed a few chances as well and I played well.

“On paper he is the favourite but it was a match where if I played well I would win and I did play pretty well. I was a bit more focussed than usual and I knew I had to play well if I was going to win and I think that put me in good stead for that match.

“It is always great to play in Matchroom events and to turn up and beat the world number three is great. I am only three matches from winning the title now so if I break well and cut down the errors I could go all the way.”

Gray can look forward to either Nikos Ekonomopoulos or Ralf Souquet in the quarter-finals.

In the final match, England’s Darren Appleton looked in control throughout against Mateusz Sniegocki. He took the lead in the early stages and never relinquished it.

Commented Appleton; “I played really well throughout the match. I got off to a dream start going 4-0 up but the player that he is, he came back strong. He is a great player and I think I had one of the toughest first-round draws. We have both beaten each other a few times so I knew before the match that he is a very good player, a future Mosconi Cup player.

“It is tough out here and I am very pleased to win the first round. I was very nervous. I might not have shown it on the outside but on the inside I was probably as nervous as I have ever been but I managed to hide that well. I was really pleased, just mentally at the table I felt focused and had nothing negative running through my mind.

“With Karl and Daryl losing it puts a bit more pressure on me and Mark Gray as the only two Brits left, so I was happy he won his match just before mine to take a bit of pressure off me. It would have been a tragedy for all of us to lose in the first round.

“You never want to lose in the first round, it is the worst time to lose. Now I am guaranteed to play on the last day and Sunday will be a long day hopefully.

Play continues on Saturday evening with the final two first round matches and the first quarter final.

Pool’s biggest invitational event, the PartyPoker World Pool Masters features 16 top players from around the world competing for a $70,000 prize fund and the prestigious title. There is a high-quality stream available for $19.99 through www.matchroompool.com

Tickets are priced at £5 for Saturday and Sunday afternoon, and £10 for the Saturday and Sunday evening sessions. To catch all the 9 ball action there is a great value season ticket taking in all sessions for just £30 available from the venue Box Office.

thecueview would like to thank Luke Riches from Matchroom Sport for writing, and providing us with this article from the 15th August 2015 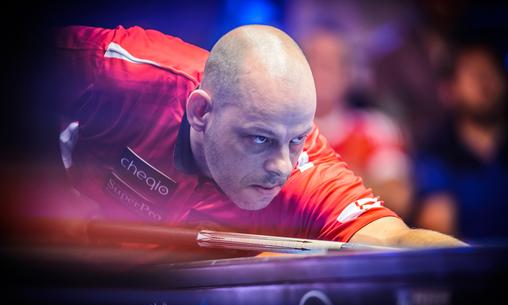