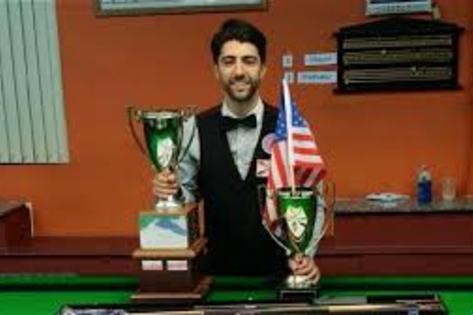 The competitive field was made up of previous champions and budding hopefuls aiming to win the lucrative title, which also carried tickets for the World Amateur Championship later on in the year.

Tom Kollins, the very first United States winner back in 1991 (in a record total of 5 times) would take part in the event despite his grand age of 80! He would perform superbly in reaching the quarter finals.

However, it was another previous champion - Sargon Issac of California ,who would double up to regain the crown he first won in 2012.

The players were initially split into groups for the early stages of this 4 day extravaganza, and the favourites all progressed to the knockout last 16 portion on the Sunday and Monday.

Reigning champion Ajeya Prabhakar was looking good after remaining unbeaten throughout the round robin phase, which he followed up with a comprehensive 3-0 KO win over Don Sitarski.

Kollins drew on his vast experience by recovering from 2-0 down to pip Henry Wong, whilst Issac swept aside Rizwan Khan 3-0.

During the quarter-finals, Prabhakar survived a major scare when he trailed 2-0 and 3-1 to Washington’s Cheang Ciing Yoo, but as a true champion he showed great mettle and nerve by clearing the colours in frame 5 which was a catalyst for his comeback to win 4-3.

Kollins’ run ended at the hands of Raymond Fung, Issac beat New York resident Kevin Wong, and together with Aly Elsayed’s clean sweep victory, it would ensure that all of the 4 seeded players would make up the semi-finals on Memorial Day Monday.

The last 4 couldn’t have been closer with both matches going down to the wire - but it was the 3rd and 4th seeds who would take the final places. Aly Elsayed finished the reign of Prabhakar 4-3 whilst Issac beat last years runner-up Fung by the same scoreline.

So the best of 9 final would be between two names already etched on the beautiful trophy.

The match would turn out to be an epic late night thriller which saw 29 year old Aly start the brightest. He made breaks of 51 and 40 to open up a 2-0 lead, and was on course to win the third with a run of 55 before Issac counter attacked to nick it on the black.

This was probably the foothold Issac needed as he won the fourth to go in all square at the interval. He soon after led for the first time, before Aly took the sixth to level it again.

The match would become fragmented in the latter stages, not surprising considering a long few days of mentally draining snooker. But it was the Californian who would emerge the strongest to take the 7th and 8th with scores of  57-26 and 62-28 to win 5-3 overall.

Founding member and Honorary Chairman of the USSA Michael Collins was on hand to present the awards, in which was regarded as the best tournament they have ever had.

Both Issac and Aly Elsayed now have the opportunity represent the United States at the IBSF World Amateurs which is set to be held during November in Africa.

It is great testament to the USSA and its supporters that this championship continues to grow in now its silver year.

Some serious and intense hard work has been put in behind the scenes to make snooker a growing force across the Atlantic, in an obviously pool dominated environment.

The Association has a loyal following and they have made big strides in distinguishing snookers tag of an ‘immigrant’ sport within the States.

They also have a very well organised USA tour structure, and although we may not see an American on the Pro Tour in the near future, it is surely a market with exciting possibilities for Barry Hearn and his World Snooker crew.

RESULTS (from the Quarter-Finals onwards)