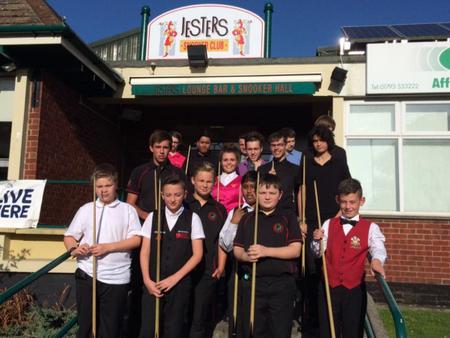 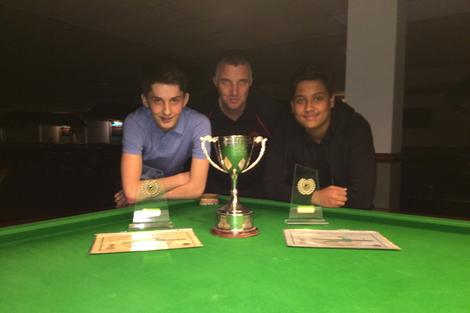 ​​Welsh talent shines through for the second year in succession. The West of England Billiards & Snooker Foundation, Bronze Waistcoat Open Snooker Championship for under 16’s was hosted and sponsored by Jesters Snooker Club, Swindon. This ‘grass roots’ tournament provides a platform for young players to demonstrate their talent. 17 players from England and Wales played 95 frames of snooker in order to find a winner of this coveted title. The last man standing was Tyler Rees from Llanelli who beat Hamin Hussain from Birmigham in the final. On his way to the final Rees swept aside all-comers without dropping a frame and posting breaks of 87,62,51,46,42,43 & 33. Hussian also made impressive progress through to reach the final, dropping just two frames and making breaks of 50,42,39,34,32,32,31,30 & 30. Going into the final Rees and Hussain had both inflicted heavy defeats on opponents Callum Browne, Westbury and Mark Lloyd, Portsmouth respectively.

In his win over group A qualifier Callum White (Portsmouth), in the quarter-finals, Lloyd posted the best break of the day, a superb 98 to go with a 50 break he had earlier in the groups stages. Other quarter-finals saw Hussain edge out Harry Farrell (Tamworth) by the odd frame after Farrell had kept a clean sheet to qualify top of group A. Halim Hussain, brother of Hamin, topped group B undefeated to qualify, only to fall 2-0 to Browne in the quarters…despite a 39 break. Up until quarter-finals Liam Davies, Tredegar was having a good day, finishing second in his group and only losing the one match by a deciding frame. He was then to find himself on the receiving end of an excellent 87 break from the eventual winner Rees to spoil Davies’ progress.

The plate finalists, Chloe White (Portsmouth) and Jonny Mutch (Cambridge)  both made light work in beating their respective opponents to reach the final without losing a frame. Even though White produced some quality safety play, Mutch sank the black to win and take the plate prize.

The main event winner received the coveted WEBSF Bronze Waistcoat Open Snooker Championship trophy and a share of the £170 prize money. No player left empty handed as all received a certificate of participation and a selection of other prizes. Special thanks to the parents, some who had travelled a considerable distance, also to referees Nick Harry, Steve Brookshaw & Chris Coumbe and finally to Jesters Snooker Club for hosting and sponsoring the event.

WEBSF Coach and referee Steve Brookshaw said “I have nothing but praise for all the players here today. As well as top youth players of international standing this event was, for some players, their first major tournament, the standard of play and the attitude on show was excellent. I hope we can return to do it all again next year and attract even more players.” Details of this and other WEBSF tournaments can be found on http://www.websfsnooker.com, WEBSF Facebook Group or by contacting Steve Canniford, Mobile 07891940995.

For more pictures of the event and a link to the full results, please click here.

thecueview would again like to thank the whole team at the WEBSF for their tireless and enthusiastic commitment to amateur snooker.