​​Showing why he is not only one of  pool’s most talented performers, but  perhaps its most hardcore player as well, Taiwan’s Ko Pin Yi captured his first World 9-ball Championship tonight in Doha, trading blows with the USA’s Shane Van Boening for two and a half hours before pulling away in crunch time to win 13-11.

Both players put in gritty, high quality performances, with brilliant shot making under pressure, coupled with just a handful of errors from both superstars. The outcome was in doubt right down to the dramatic end, but it was Ko who seemed to will himself over the finish line for the historic win.

The win is the 26 year old Ko’s second world championship this year, after capturing the 10-ball world title in the Philippines back in February. That victory seven months ago served to fulfill the former teen pool prodigy’s long cherished dream of winning his first world title. Tonight’s win puts Ko in the pantheon of all time pool greats.

For Van Boening the loss in his first ever World 9-ball final has to be a massive disappointment, especially considering that he had literally lapped the field in his prior matches, playing some of the most scintillating 9-ball seen in many years. But the American’s mastery of the break shot came to end against Ko, and he was forced to duke it out with the Taiwanese. Van Boening had more than enough chances to pull out the match, but with the pressure mounting late and the wear and tear taking its toll on both players, Ko had just that little bit extra to get the job done.

Under normal circumstances a match up in the world finals between greats like Ko and Van Boening would be expected to be a tight slugfest from beginning to end. But prior to the final almost nobody in the Al Arabi Sports Club, and the tens of thousands tuning in around the world on the live stream, was giving Ko a chance. That’s because up until that point the American had been in a rarefied zone that few pool fans had ever seen, winning his five previous race to 11 matches by the almost preposterous total score of 55-14. Having figured out the break shot, Van Boening simply couldn’t be stopped and he carried an air of confident invincibility that made him appear untouchable.

The day began with the two semi-finals and the contrast couldn’t have been more different. Playing on the TV table against Pin Yi’s younger brother Ko Ping Chung, Van Boening again hit every break shot perfectly—wing ball down and open shot on the one. He quickly jumped out to a 5-0 lead before the 20 year old Ko got one on the board. But then it was straight back to the race track and before anyone knew it the American had won the match 11-1. Van Boening was making 9-ball look like child’s play.

On the adjacent table Ko Pin Yi and former World 9-ball Champion Wu Jia Qing, as expected, put on a show for the ages.  Wu had Ko pinned down at 6-2, but Ko clawed his way back to 6-5. Leading 7-6 Wu played an errant safety and Ko got his first tie, and a shot of confidence to boot and he soon went ahead 8-7.The pair then took their games to the next level, trading pressure packed break and runs, safeties and clutch pots. Wu would never lead again as the two Taiwanese were tied at 8, 9 and then 10. Having won the lag, Ko had the last break and broke and ran for a well deserved spot in the finals.

An hour later the race to 13 final began and, based upon thumping Van Boening had given to Ko’s younger brother, and everyone else he had faced this week, almost nobody had picked the Taiwanese to pull off the win. Ko, however, is clearly not ‘everyone else.’

The Taiwanese won the lag and after a safety battle, grabbed the first rack to go up 1-0. Van Boening notched the next rack, and the pair traded frames with each holding serve until the score reached 4-4. But one thing was vastly different for the American in this match compared to all his previous matches. Although he was having some success on the break, he wasn’t nearly as flawless on that break as he had been throughout the week.

Then in rack 9 Ko was the recipient of several lucky rolls that would be the first of nearly a handful that would help propel him forward throughout the match. Ko scratched shooting at the 7-ball but was fortunate that the same ball ended up married to the 8-ball, leaving Van Boening only a difficult bank, which he missed. Ko then missed the subsequent shot, but this time the 7-ball got snookered. Ko eventually took a rack that he had no business winning to move up 5-4.

Shane found his break and ran the next rack to tie it at 5-5. Then in the next frame Ko got lucky again. He went for a 2-9 pot, missed, only to see the 9-ball drop in the side for a fluke win and a 6-5 lead.

To his credit Van Boening kept his composure and it served him well. Two break and runs sandwiched around a Ko scratch brought the American his first lead of the match and an 8-6 advantage.

Just as he did against Wu earlier, however, Ko used the deficit as his motivation to stage a fight back. At the same time Van Boening lost his momentum and several mistakes cost him plenty. Ko won two straight to tie the match at 8-8.

Ko looked to be going up 9-8 before a shocking scratch while shooting an easy 8 gifted Van Boening the rack and a 9-8 lead. But then the American gifted one back in the next frame, losing position on the 7 and leaving a jump shot in the jaws. The match was now tied at 9-9 and the world title looked like it was going to come down to a flip of the coin.

With the pressure palpable Ko took back the lead in the next frame. Van Boening pounced on an errant 4-ball and tied it again at 10-10. Ko responded with a break and run. And then Van Boening did the same to tie it at 11-11. Showing incredible moxy, Ko then fired back with yet another break and run. The Taiwanese was one away from the crown.

The final frame served as a metaphor for Van Boening’s one and only match in the tournament where he experienced breaking struggles. With no open shot after the break, the American had to push out. Ko declined the shot and Van Boening’s  attempt at the two-ball went astray, leaving an open table for Ko. A battled hardened Ko took his time and picked off the remaining colors and claimed his very first World 9-ball Championship.

After soaking up the accolades and posing with his winner’s trophy and $30,000 check, Ko basked in the quiet satisfaction of a job well done. Yes he had made a few mistakes. Yes he had gotten some lucky rolls. But he had persevered. And that, above all, made this win that much more special.

“When I won the World 10-ball in the Philippines, that was great,” Ko said. “But winning the World 9-ball Championship, this is unbelievable. I’m really happy because before I came to Doha I wasn’t playing that good. But I worked really hard on my game, especially my break shot.

“I definitely didn’t play per perfect in the final. But I played really good in the semi-final and of course that is more important because that got me to the final. I was 7-6 behind when Wu made one safety mistake, and after that everything changed.

“In the previous matches I was playing perfect, just like Shane, who is such a great player, a real gentleman. But it’s the final of the World 9-ball championship and you know so many things can happen. I think we both played good and both made some mistakes. I feel that I got a few lucky rolls to help me win the match. There was a lot of pressure especially from 8-8 on. But at the end of the match I played good and I am happy I was able to stay patient. You just never know in 9-ball. The ball is round and you have to wait until the last 9-ball drops.”

An obviously gutted Van Boening knew he hadn’t played in the same swashbuckling style that had brought him to the finals, especially with the break shot. The American, however, still played a brilliant match. He also took the loss like a man, gave credit where it was due, and promised his fans he’d snap a world title off soon enough.

“He got a lot of fortunate rolls and he got lucky to hook me a couple of times after misses,” Van Boening said. "But I also made a couple of mistakes that I should have never have made. He played great and really didn’t make that many mistakes. I think I made more mistakes than he did and that is what cost me.

“He was breaking good and I was breaking bad. There were more people in here(the Al Arabi Sports Club) which changed the temperature and the break a little bit. I really think that was the difference. My break wasn’t working for me. I was having trouble getting a clear shot to run out. That’s the way the game plays.

“There’s nothing I can do. I’m not that disappointed. It’s an honor to play in the world championship finals. I know I can’t win every tournament. Either way if I win or lose it was fun to play in the finals. I’ll be back.”

**The 2015 WPA World 9-ball Championship was sanctioned by the World Pool-Billiard Association(WPA), the governing body of pool, and promoted and hosted by the Qatar Billiard and Snooker Federation(QBSF).

thecueview would like to thank Ted Lerner and Richard Walker for supplying us with this article from Saturday 19th September 2015. 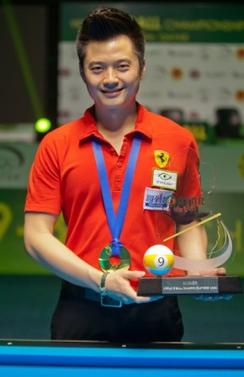 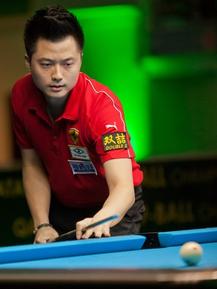 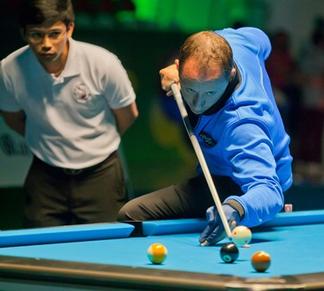