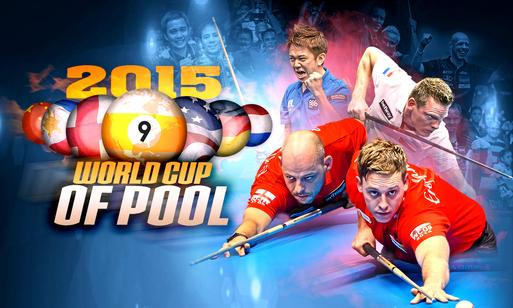 With the annual World Cup of Pool coming back to London this September, Matchroom Sport can announce the 32 teams and players set to contest the annual $250,000 pairs tournament. Taking place at pool’s fiercest venue, the York Hall in Bethnal Green, the World Cup runs from Tuesday 22nd to 27th September.

Defending champions are England A with Karl Boyes and Darren Appleton looking to become the first pair to successfully defend their crown. Competition will be tough though, with a host of previous winners and finalists taking part.

Germany will be represented by 2011 champions Thorsten Hohmann and Ralf Souquet and 2012 winners Mika Immonen and Petri Makkonen (Finland) will be once again taking part. America’s Shane Van Boening, a winner with Rodney Morris in 2008, is paired with Mike Dechaine this time, while Li Hewen, a two-time winner in 2007 and 2010 will be partnered by Liu Haitao as they make a run for title number three for China.

Holland, desperately unlucky to be runners up in 2013 and 2014, will be looking to go one better as Niels Feijen and Nick Van den Berg team up once again. Daryl Peach and Mark Gray, who came so close for England in 2008, will also be trying to repeat those performances.

Other highly fancied teams include the Philippines which pairs former World No.1 Carlo Biado with under-rated Warren Kiamco and Taiwan – World 10 Ball champion Ko Pin Yi and Chang Yu Lung. Team Austria will also fancy their chances as World No.1 Albin Ouschan and Mario He pair up one again.

Malaysia – Ibrahim Bin Amir & AN Other

Commencing on Tuesday 22nd and culminating in the final on the evening of Sunday 27th, the event will be played to a single elimination format over six days with two sessions a day.

There are 31 matches in total.

A season ticket covering all sessions is priced at £65.00.

thecueview would like to thank Luke Riches of Matchroom Sport for writing, and providing us with this article from the 20th August 2015