Sean O'Sullivan at the table

ENGLAND
The English Association of Snooker & Billiards (EASB) held their finals weekend at the Longton Snooker and Pool Club in Stoke on Trent this month, with a number of age category national finals to be played. Regional heats /qualifiers of these competitions had previously been decided earlier in the season.

Mark Lloyd won the last two frames to edge out Jack Harris 6-5 to become the English Under 16’s champion, whilst Hamim Hussain is the Under 14’s winner after overcoming Taylor Fish 5-2.


SCOTLAND
Former European Under 18’s champion Dylan Craig continues to upgrade his snooker CV when he won the Scottish Under 19’s Championship at the Minnesota Fats Club in Glasgow this month.

As part of Scottish Snookers finals month, Craig beat another renown youngster in Chris Totten 5-1, as he rattled in breaks of 68 and 65 to take the trophy.

Calvin Gourlay had a very satisfying end of season, as he claimed a ’double’, winning two of the other age categories


NORTHERN IRELAND
The final of the Northern Irish Under 19’s Championship couldn’t have been closer, as Connell Doherty ousted fellow Belfast player Peter Berryman in a deciding frame finish.

At the end of the days play, being held at the Blackstaff Snooker Club in the capital, Connell fluked the brown in the last and made it count by clearing the remaining colours to take the title.

Berryman had the consolation of making the days highest break with a 98.


REPUBLIC OF IRELAND
There were many titles up for grabs during the RIBSA finals weekend at the Ivy Rooms in Carlow this month.

But it was 13 year old Ross Bulman from Youghal who was the star of the show, when he picked up an impressive hat trick of victories.

In the Under 14’s final he beat Aaron Goldrick (Cavan) 4-2, in the Under 16’s he eliminated Ronan White (Letterkenny) 4-2 and then in the Under 18’s section he defeated club mate Noel Landers 4-1.

It was quite an achievement for young Bulman, who had never previously won a national championship, although he did top the Under 14’s ranking list earlier in the campaign.

Fitzgerald did however gain success in the Under 21’s final when he narrowly defeated Landers, who lost his second final of the weekend to another club mate.

With the score line 3-3 and in the deciding frame, Landers very sportingly called a foul on himself which no one else saw. Fitzgerald went on to take the frame for the glory, who now receives an invite to the IBSF World Under 21’s in Romania next month.

The youngest category was the Irish Under 12’s which was won by Jamie Lee Gardiner (Antrim) after his 3-0 final win over Adam Quinn of Edenderry. 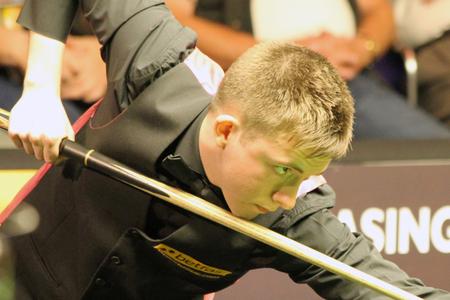