Iranian duo of Soheil Vahedi (pictured above) and Amir Sarkhosh upset the odds in retaining the Asian Snooker Teams Championship in Abu Dhabi this week.

The same pair had won the title for the first time in their homeland last year. They came to the 4th annual edition of this event as one of the most dangerous teams, but surely behind the Indian 'Dream Team' of Pankaj Advani and Aditya Mehta in the list of favourites to win it.

14 different nations began the tournament (host nation UAE, Iran and Pakistan also had second teams), with a format of single frame matches in the style of 'Davis Cup Tennis' (singles and doubles).

Split into four round robin groups, the top two from each qualified for the 'Knockout Stages'.

​Vahedi and Sarkhosh's defence very nearly ended at this first avenue. Despite winning just one of their three fixtures in Group C, they went through on frame difference ahead of Saudi Arabia and Bahrain; who both also had one victory each. Pakistan (2) topped the table after winning 3 out of 3 matches.

Coming through in second meant they faced top seed opposition in the Quarter-Finals - this would come in the form of an exciting Thailand team consisting of former professional Ratchayothin Yotharuck and Yuttapop Pakpoj.​ But a double for Sarkhosh, including the decider, saw them squeeze through 3-2.

Iran had a more comfortable time in the semi-finals, dispatching the previously unbeaten Malaysia team of Keen Moo Hoh and Kok Leong Lim 3-0.

​Meeting them in the final was India, who were seeking a hat-trick after claiming the opening two editions in 2013 and 2014.

Advani (the newly crowned Asian 6 Reds Champion) and Mehta also came through as a second seed after losing out to Thailand in Group B.

However, they were dominant in the KO's, eliminating UAE (1) and Pakistan (1) both 3-0 in the quarter and semi-finals respectively.

The championship decider was a tight affair.

​Mehta made a 52 break in securing the first point for India against Sarkhosh, before Vahedi responded with victory over Advani to make it 1-1.

The Iranians moved onto the hill after a comprehensive win in the doubles, although Advani pushed it all the way with a black ball success against Sarkhosh in the fourth rubber.

But after nearly four days of action, Vahedi (the 2015 Asian 6 Reds Champion) was the hero with a 74-40 points win in the decider.

Keen Moh Hoh had the highest break of the competition - a run of 117 in the Groups Phase. 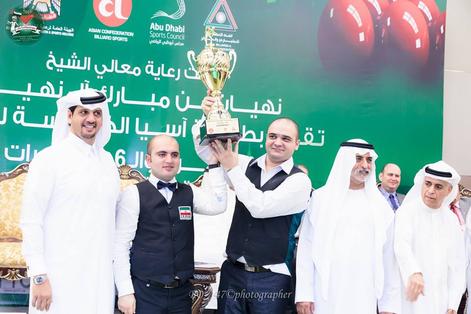