Wendy Jans and Darren Morgan once again reconfirmed dominance of their respective divisions within the European Snooker community last night in Lithuania.

It would be a 'Perfect 10' for Belgium's Jans as she defended her European Ladies Championship after ousting Daria Sirotina 5-4 in the final; the tenth time the 32 year old has taken Euro gold.

Jans qualified top from Group A without dropping a single frame in three matches. As one of the top seeds for the Knock-Outs, she was spared a preliminary match and moved straight into the Last 16.

​There she eliminated fellow countrywoman Cathy Dehaene 3-0 with breaks of 34 and 36.

Her quarter-final clash with Latvia's Tatjana Vasiljeva exhibited her determination and comeback qualities as she recovered from 2-1 down to win 3-2.

​Jans made breaks of 31 and 34 to take the opener but Vasiljeva, who has been given a wildcard to this month's Riga Masters in her home country and will play Marco Fu, turned the tie around with Frames 2 and 3.

However - champions never quit, Jans registered a run of 48 to force the decider before a 30 in the last helped her secure the victory.

​She was also challenged well in the semi-finals, initially falling behind 1-0 and 2-1 to Anastacia Nechaeva (Russia) before claiming a 4-2 success. Wendy posted a quartet of 30 plus breaks.

In the final, Jans would face another Russian in the form of Sirotina, who was arguably the player of the tournament so far.

Not only was she unbeaten, but the Russian hadn't dropped a single frame throughout the entire competition on route to the final.

She was 9 out of 9 in Group D and then defeated Manon Melief (Netherlands) 3-0, Nastya Toumilovitch (Belarus) 3-0 and Michelle Sherwin (Republic of Ireland) 4-0 in the L16, QF's and SF's respectively.

It would mean a repeat of the final from Prague last year (Jans won there 5-0).

​Unlike her previous ties, Jans started the final well in taking a 3-1 advantage with the aid of a 42 break in Frame 2. (Sirotina made a 40 in F3)

Sirotina followed suit by notching up 3 of the next 4 to take it to the wire, but Jans held her nerve for the victory 52-15 in the last.

The win was also testament to Jan's mental strength, as she was also involved with the Team Event during Friday as well.

Former top 8 professional Morgan made it a memorable week in Vilnius as he retained his Masters crown with a comfortable 6-0 win over somewhat surprise finalist Brendan Thomas (Republic of Ireland). Only the Friday before had the Welshman scooped the European Open as well.

Just like Jans, Morgan eased through his Group without trouble and moved himself into the Last 32. There he saw off Lance Little (Scotland) 3-1 and then Peter Donegan (Republic of Ireland) 4-1 in the L16 with efforts of 56 and 122; which would be the highest of the whole event.

Englishman Shaun Wilkes was also dispatched 4-1 in the Quarters before a final berth was confirmed with a 5-1 success against reigning English Amateur Champion Jamie Bodle (last year's Runner-Up to Morgan too) 5-1 in the Last 4.

​At 61 years old, Thomas was the oldest player in the field. He had held his nerve in the Semi-Finals by slotting home a fantastic match ball pink in his narrow 5-4 win against Malta's Jason Peplow.

But unfortunately, the Final was just one step too far for the Irishman, Morgan chalking up contributions of 40, 75 and 46 in claiming the title for a seventh time.

Written and published by Michael Day on the 11th June 2016 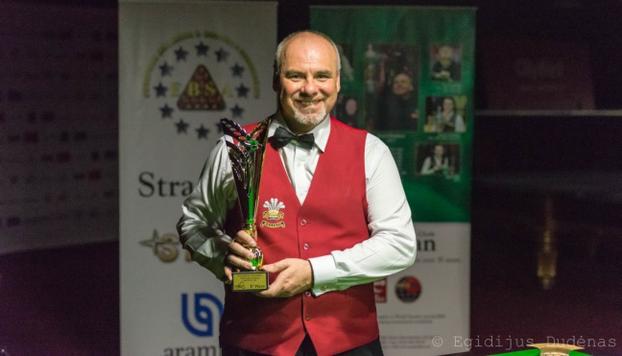