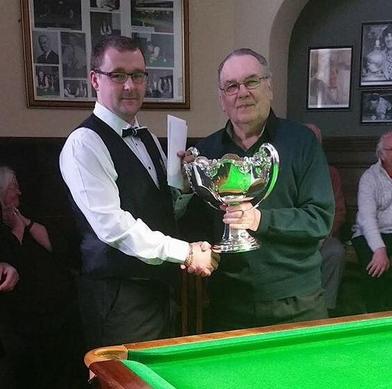 An in-form Rob Hall claimed his fourth consecutive English Amateur Billiards Championship during this past 'Finals Weekend' in Darley Dale.

Fresh from winning the UK Open only a week earlier, Hall notched up yet another prestigious honour to his already bulging Billiards CV.

​The tournament took place over different stages and venues throughout the season. After the regional, and then area heats, just four remained here.

​In the semi-finals, the nationally ranked number 1 beat John Mullane 1440-777; chalking up top runs of 280 (the overall highest break), 111 and 179. Mullane had held his own early doors in the contest, but Hall eased away in the second session.

​Two-time champion Phil Welham would be his opponent in the 4 hour final after he ousted Mark Hatton 984-905 in an exciting finish to their Last 4 encounter.

Hall, though, stomped his authority in the final pretty much straight away with efforts of 132, 147, 125 and 146 to establish more than double the points of his rival at the mid-match interval.

On the resumption, Hall maintained his cushion, and aided with further contributions of 122 and 211, he came out a 1480-813 victor.

Whilst Welham (featuring in his fourth final overall) may be disappointed not receiving the top honour, he can be very proud of his efforts from this keenly fought event.

Written and published by Michael Day on the 8th April 2016