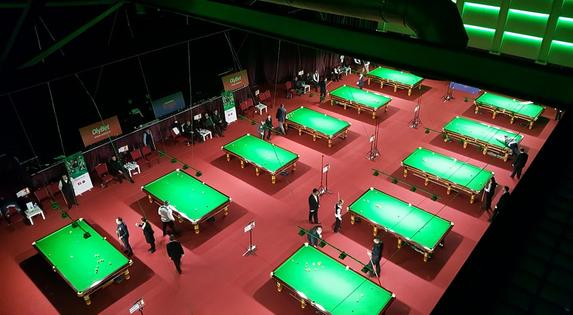 ROUND ROBINS COMPLETE IN LITHUANIA

We have now reached the knock-out stages for the 2016 European Ladies and Masters Snooker Championships in Vilnius, Lithuania. The KO action is set to begin Thursday at the Panorama Hotel.

Defending Ladies Champion, and hot favourite to defend her title, Wendy Jans (Belgium) comfortably qualified top from Group A after a trio of 3-0 wins over opposition from Romania, Poland and the host nation. The 32 year old is chasing down a staggering 10th European victory.

In total, there were 11 groups of 4 which consisted of 44 players from a healthy 14 different countries.

The top 2 from each have qualified, with the Preliminary Round of 22 being sorted out before the more even number of 16 etc.

Fresh from winning the European Open last Friday, reigning Masters title holder Darren Morgan (Wales) is still on course for a seventh win in this event by virtue of an untroubled qualifying campaign in Group E.

​The former top 8 ranked professional made six breaks of 40 or above (85 being the highest) on route to a hat-trick of 3-0 successes.

Darren Ellis (Scotland) was also 9 frames out of 9.

Malta's Alex Borg entered this tournament before he regained a World Snooker tour card at Q-School, and was therefore permitted to still compete. He will also feature in the KOs, after winning all 3 matches.

​Borg has the highest break so far with an effort of 114.

​For more information and the full results (including news on the ongoing teams events too), please visit the European Billiards and Snooker Association (EBSA) website here.

Written and published by Michael Day on the 9th June 2016