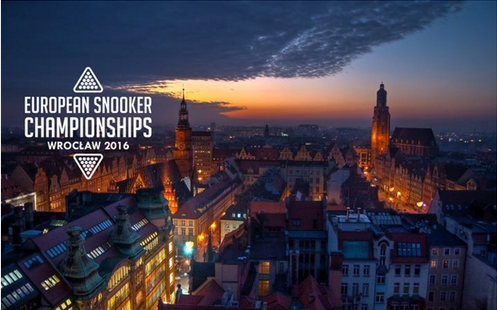 The European Youth Snooker Championships are due to get underway this weekend with the opening ceremony on Sunday. The event is sanctioned by the European Billiards and Snooker Association (EBSA), and are part of the two week snooker festival with the Men's Championship played straight after.

It is the first time these age category tournaments have been played in Poland, although they did hold their now defunct Under 19's competition in Kalisz in 1999.

I believe it is also the first time that the EBSA have created an Under 18's section. I presume this is to go in line with the International Billiards and Snooker Federation (IBSF) having a World Under 18's Championship in Russia last year.

So long as they meet the requirements, players may enter both sections here (although I'm sure this will be a bit of a logistical nightmare for the organisers!).

In the lower age bracket there are 72 players representing an impressive 24 different nations. The main threats here should come from the UK and Ireland, but there is plenty of continental European talent who could spring a shock and go far.

The Under 21's has 81 competitors from 26 nations - another very healthy field.

Here are the more familiar names, including former professional players such as home hero Kacper Filipiak and Alexander Ursenbacher (Switzerland).

There is also a host of other well known cueists, including last years runner-up Louis Heathcote (England), Lukas Kleckers (Germany) and Brain Cini (Malta). The traditional powerhouses, again, should do well though.

The winner of the U21's will also be awarded professional status on the World Snooker tour for a guaranteed two full seasons. Last year in Malta, the Isle of Man's Darryl Hill claimed the honours.

Entrants in both tournaments will play in a round robin format which is then followed by a straight knockout.

To keep up to date with the results, please visit the EBSA website here.

Written and published by Michael Day on the 5th February 2016