'GRANITE' GRAY - HARDER THAN EVER TO BEAT!

Mark Gray continued his terrific run of results by claiming the Austrian Open leg of the 2016 EuroTour. It means multiple titles within a week for the Englishman, after pocketing the latest stop on the GB9 Tour the previous weekend.

​Following on from the European Championships that were held there the previous 11 days (there was a rest day in between though) a bumper field of 215 players from the continent and beyond took part in the 34,000Euro guaranteed Open event.

Now in the knockout portion of the event, in the Last 32 he dismissed newly crowned European 10 Ball Champion David Alcaide (Spain) 9-7, and then beat fellow countryman Imran Majid 9-3.

​Next up he sank German duo of Stebastian Staab and Joshua Filler both 9-6 in the quarter and semi-finals respectively. Staab and Filler were two thirds of the Germany set-up that had won the recent European Team event.

In the gold medal match, Gray would face maiden finalist Ronny Regli of Switzerland, who had battled his way through the losers side after an early defeat. The 30 year old won a total of 9 matches on route, highlighting victories over Marcus Chamat, Petri Makkonen, Ivo Aarts and Marco Teutscher in the KO's.

Starting the final as the underdog, Regli coped well with the pressure - matching his opponent up to 5-5. But Gray, perhaps, made his experience count in claiming the last four racks for a 9-5 success.

It is Gray's sixth career EuroTour championship, and second in only a matter of months having chalked up the Italian Open at the end of 2015. He has the impressive record of never losing in an ET final too.

The 42 year old now also moves to the top of the European rankings; dethroning long time possessor Niels Feijen, who bowed out to compatriot Teutscher 9-8 in the Last 16.

​Feijen did however eliminate Jayson Shaw in the Last 32, as the three-time Turning Stone Classic winner continues his trip across Europe.

For the full results, please visit the EuroTour website here.

Written and published by Michael Day on the 17th April 2016 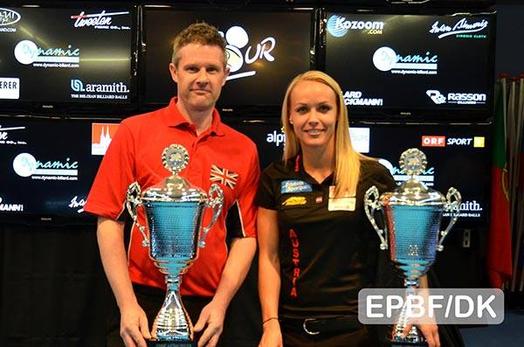