​The opening event of the 2016 season has concluded at the Park Inn hotel in Telford, with Mark Gray, Craig Osborne, Chris Fraser and Louis Callaghan walking away with the titles.

​​The 2016 Midlands Classic final was contested by two former winners of this event – 2014 champion Chris Hall, and 2009 and defending champion Mark Gray, with both looking at a second and third Midlands Classic title respectively.

Gray began the tournament in typically imperious form, whitewashing Craig Reynolds 9-0 to proceed to the next round. Kurtis Weaver was his next opponent and, whilst he provided a tougher test, Gray still marched on to the winners qualifiying round with a 9-5 win. Fellow tour stalwart Andy Worthington was aiming to secure his place in the last 16, but Gray instead found a winning formula to take his rightful place in the single elimination stage wth a hard fought 9-7 win. In the last 16 it was Matthew Hyden looking to make a maiden quarter final at the expense of Gray, but the player they call Granite held strong with a 9-6 victory. Fellow professional Daryl Peach was looking for his first GB9 title since November 2014, but his run ended in the last 8 with Gray winning 9-5. Last up trying to pry the Midlands Classic title from Gray’s grasp was Imran Majid, but Gray’s steady form continued – another hard earned 9-6 win took him into the final and one match from completing a successful defence of his title.

Hall, winner of this event two years ago, Started in a similarly dominant manner to Gray. He successfully made his way into the winners qualifying round with 9-1 and 9-2 wins over Julian Roper and Bob Harris respectively. Martyn Taylor, however, was soon to put a halt to proceedings. He put Hall on the wrong side of a 9-4 score line, taking Taylor safely into the last 16 and dumping Hall into the last chance saloon losers qualifiying bracket. Hall was in no mood to hang around there, however, and a swift 7-2 win over Mark Parker ensured his safe passage to the last 16. Chris Cowie was unable to make it any further in the tournament, and Hall took a 9-6 victory to secure his place in the quarter finals. The Yorkshireman met the Cornishman in the last, as the character and ever improving Robin Cripps stood in the way of Hall and the semi finals. Hall copied his exploits of the previous round in securing a 9-6 win, meaning Damian Overton was the last person who could stop Hall. Overton was looking for a GB9 final appearance at his very first attempt, but as hard as he tried it was Hall to reigned supreme. 9-7 was the winning score, and Hall continued to the final.

The final saw Gray take the initiative from the word go and never relinquish control of it. He ran away with an 11-4 victory to become the first player to win the Midlands Classic title a third time. Gray’s victory saw him take a provisional ranking of #12 over just three events, whilst Hall’s run to the final saw him rise to a career high of #3. Craig Osborne, despite not reaching the last 16, remains comfortably in top spot.

​​The first Pro Cup of the 2016 season saw the newly crowned Midlands Classic champion pit his wits against the reigning British #1, as Mark Gray and Craig Osborne squared up in the final.

Osborne, sore from an early exit in the main event this time around, was keen to get off to a good start. He managed just that against Robin Cripps with a sound 10-2 victory and set up a winners qualifier match against Midlands Classic finalist Chris Hall. Hall was eager for silverware himself, however, and he consigned the Shotgun to the losers bracket with a convincing 10-3 win. Aiming to stop Osborne in his tracks once more was Lee Rigby, making another welcome return to tournament competition. Despite Rigby taking a commanding lead, Osborne came back to win by 10 racks to 5. Imran Majid, semi finalist in the main event, was aiming to reach the semis once again in the Pro Cup. However, Osborne ensured he didn’t – a gritty 10-8 win set up a rematch with Chris Hall for a place in the final. Osborne turned the tables this time round, and a 10-7 win was enough to put the British #1 into the final.

Fresh from his victory in the main event, Gray began his campaign in the Pro Cup against newcomer Jamie White. Gray kept the engine ticking over with a 10-5 win to proceed to a match with Kevin Uzzell in the winners qualifiying round. Uzzell had only the night before flown home from Thailand, and maybe jet lag was responsible for Gray’s 10-2 victory. Nonetheless, a win was a win and a quarter final awaited with Daryl Peach as was the case in the main event. A slightly closer score line, albeit with the same winner, with Gray victorious by 10 racks to 7. Darlington’s Phil Burford, back on the tour after a year’s absence in 2015, was one step away from a final on his return. His run was ended by Gray, however, and a 10 racks to 6 win was enough to put Granite just one win away from completing a flawless weekend.

There was no looking back from Osborne after winning the lag. After breaking and dishing five consecutive racks, it was always going to be an uphill struggle for Gray. His efforts were futile in trying to gain any control of the match, and Osborne eventually ran out an 11-6 winner to walk away with the spoils.

​The top amateur players in the country whittled down to Scotland’s Chris Fraser and England’s Benji Buckley, both of whom qualified for the first Tier I final of the season.

Fraser’s excellent form from 2015 ensured a bye in the opening round of the competition, so Ben George was his first opponent in the last 32. Fraser swept him aside with a swift 9-2 win, setting up a clash with the IPA world number 8 Andy Macdonald in the last 16. The dual code convert gave Fraser a run for his money, but the Scot eventually won through 9 racks to 6. The quarter finals saw Fraser meet Mark Parker, himself in a rich vain of form and making good inroads in the challenge division. His run was ended in the last 8 though, with a 9-3 win putting him into what turned out to be a classic semi final with Phil Wildman. Both players were looking to take down the first Tier I final of the season and the match couldn’t have been closer, but Fraser scraped over the line with a 9-8 victory.

Buckley was not long back from taking down the Florida State Championship last month and was keen to add to his mantelpiece this weekend. He too had a bye in the opening round, but faced a stern test against Dave Nelson in the last 32. Two very capable players took the match all the way, but Buckley won through 9-8 to face former Challenge Cup winner Morray Dolan. Buckley was in ruthless form now, and a 9-2 win ensured passage to the last 8 where he was to face Adam Stevens. The GB9 committee member has played some very tidy pool of late, but he couldn’t quite find the winning formula against Buckley, with Buckley victorious on the hill again by 9 racks to 8. Mark Foster was his opponent in the semi finals but, with the stakes high, Buckley came up with the goods. A 9-5 win was enough to put Buckley into the final after what would be considered by many to be an extremely tough bracket.

With both players in tremendous form across the competition, this was a final too close to call. Alas it was the Scot who won his second Challenge Cup competition, his first coming in the first Tier II event of 2014, with a 9-6 win over Buckley. The result ensures that the two players now assume the top two positions in the Challenge Cup rankings, albeit with the defeated Buckley currently sitting pretty in top spot.

​​Two players in the Tier II competition both got their first taste of a GB9 competition final, as Louis Callaghan met Steve Chick in the final event of the weekend.

Louis Callaghan began in the last 64 with a match against tour newcomer Julian Roper. Callaghan kept a steady ship, however, and a 9-5 win was enough to send him into the last 32. From here on in, his form was ruthless. Andrew Stock was his next opponent, but he could only manage 2 racks against Callaghan as the Sandgrownian potter progressed to the last 16. Michael Beeston then tried to stop him but without success – Callaghan running away a 9-4 winner and earning himself a quarter final against Al John. With the real business end of the tournament in sight, Callaghan left no stone unturned in a 9-0 demolition job, and with it earned a semi final against Adam Collins. His relentless form continued against Collins as he emerged a 9-3 winner to take a rightful place in the final.

Chick was one of the fortunate ones to have a bye in round one, so a last 32 match with Karl Hooley was first up. A clinical showing brought with it a 9-2 victory, a scoreline which was match in his last 16 defeat of Adam Wale. The next opponent in the firing line for Chick was James Welch, himself like many others making a welcome return to the tour for the 2016 season. Chick continued with his impressive form in securing a 9 racks to 4 victory to take him into the semi finals. Jamie Brennan would be the last man to attempt to stop Chick’s progress to the final, but his attempt was unsuccessful. A close match saw Chick reign supreme 9-7 and made sure of his maiden GB9 final berth.

Callaghan made slightly lighter work of his path to the final, but that only translated into the continuation of his terrific form over the course of the competition. He roundly dealt with Chick in the final, winning by 9 racks to 2.

GB9 PAUL MEDATI TROPHY
The GB 9 Ball Tour will return for the Gb9 Paul Medati Trophy on 8-10 April. Entries are now being taken and with on 8 spots remaining outside of the tour membership of 96 you had better be quick if you want to get involved. We recommend getting your event entry forms in as soon as possible. 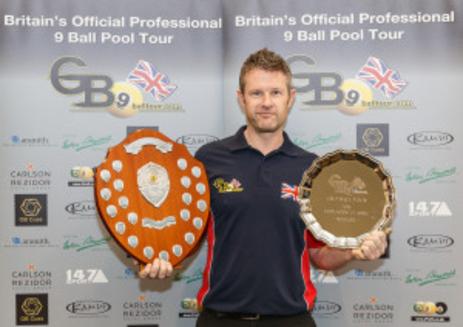