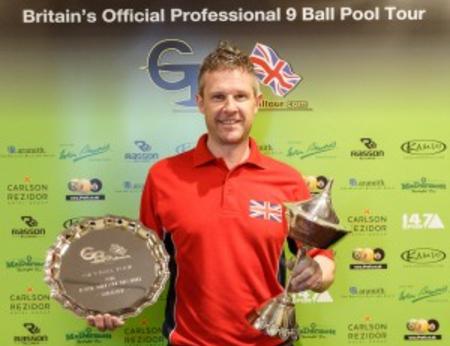 One of the most prestigious weekends in the GB9 calendar has reached its climax, and it’s Mark Gray, Benji Buckley and Jamie Brennan who have walked away with the silverware in Telford.

​The final of the 8th Paul Medati Trophy was fittingly contested between two of the tour’s finest and longest serving members – Mark Gray, aiming to win his 7th main event title, and stalwart Stewart Colclough looking to finally break his duck.

Both players began their conquests in the first winners round, with Mark Gray coming up against and defeating Jamie Brennan by 9 racks to 3. Welshman Marcel Price was next up in round 2, but an emphatic 9-1 win for Gray ensured it was the Englishman who progressed to the winners qualifying round. This time it was a Scotsman, Chris Fraser, looking to halt Gray’s progress. He was indeed successful – Gray succumbing to a surprise 9-4 defeat which meant that defeat to Al Coton in the losers qualifying round would see him out of the tournament. That was a wake up call for Gray who secured a 7-1 win to progress to the last 16. There he faced newly crowned World Blackball Champion and GB9 debutant Gareth Hibbott. Gray was taking no chances against him, and a big 9-1 win meant that a quarter final with Jordan Church was on the cards. Gray’s ruthless form continued here with a 9-2 victory, and even when faced with Jayson Shaw in the semi finals he wasn’t letting up. 9-3 was the score line with which he defeat Shaw, leaving him one win away from back to back main event titles.

Colclough’s first match was unlike Gray’s in so much as Terry Davies took the game to Colclough right to the end. The Welshman finally was defeat by 9 racks to 8, however, leaving Colclough to face Ben George in winners round 2. He allowed himself a little more breathing space with a 9-3 victory, meaning that Bournemouth’s Damian Massey would face off against him for a spot in the last 16. Massey proved victorious in this encounter, winning through 9-6 and sending Colclough to the last chance saloon one-loss bracket. Andrew John was the one to try and finish off the work Massey started, but Colclough soared back to form with a decent 7-2 win. The last 16 draw pitted Colclough and Massey together once again in what turned out being one of the ties of the round. Keen to make amends, Colclough produced the goods when it mattered and eliminated Massey from the tournament with a 9-6 win of his own. The last 8 saw London’s Ashik Nathwani attempt to make his first main event semi final, but Colclough was clearly buoyed with his previous performance and proceeded to the semi finals 9 racks to 3. Chris Hall, himself looking to meet Mark Gray in a main event final for the second successive event, was last to try and stop the progress of the Mancunian. He couldn’t manage it, however, and a 9-2 win put Colclough into his first main event final.

The final promised to be a high quality encounter and the two players didn’t disappoint. It was Gray, however, who continued his stunning form in 2016. He defeated Colclough by 11 racks to 7 to take him within touching distance of the #1 ranked spot currently occupied by Craig Osborne. Colclough takes himself up to a career high of British #5.

Gray began his run against Scotland’s Jayson Shaw, over from his new home in the USA for the competition. His was a promising talent when he left these shores, and he proved he’s only gotten stronger by defeating Gray 10-5. This sent Gray into a winner-takes-all battle with Lee Rigby, a battle he went on to win 10-3. A losers qualifiying match with Robin Cripps was next up, and Gray once again took the spoils with a 10 racks to 5 victory. Imran Majid was looking to secure his first silverware of the season, but he too suffered defeat to Gray by a 10-6 score line. Gray’s semi final was a mouth watering clash against the man who defeated him in January’s Pro Cup final, Craig Osborne. Revenge was sweet on this occasion, and a solid 10-3 win ensured safe passage to a second straight Pro Cup final.

Sanderson also opened his account with a defeat as Damian Massey continued his good form for the weekend with a 10-3 win. This meant for Sanderson that defeat to David Worrow would spell a winless end to his competition. A hard fought game went the way of Sanderson, however, and a 10-8 win meant that John Beasley stood between him and a place in the last 8. Sanderson was revved up from his previous game, with a 10-5 victory enough to take him through. The quarter finals were an all-Yorkshire affair as Sanderson faced off against Chris Hall, but it was the former who prevailed by 10 racks to 8 in a high quality encounter. The script for the semi final couldn’t have been better written as it was Damian Massey waiting to play him once again in a repeat of their opening match. Sanderson crucially came out victorious this time, and a well earned 10-6 win meant that it was he who would challenge Mark Gray for the Pro Cup title.

Sanderson was eager to halt the tremendous run of Gray, but he was unable to do so. A superb 11-2 win, including no fewer than 7 break-and-runs, went the way of Gray to ensure that he was truly top of the tree across the tournament weekend.

BUCKLEY STAVES OFF STAVELEY IN CHALLENGE CUP TIER I
Two young but highly experienced players made their way to the final of the second Challenge Tier I event of the season, with Benji Buckley and Tom Staveley fighting to be top of the pile

Both men began in the last 32 of the competition, with Craig Reynolds first in line to try and take Buckley down. He failed to to do, with a 9-5 win taking Buckley into the last 16 where he was to meet Bristol’s Jon Davies. He too was unsuccessful in trying to halt Buckley’s progress, succumbing to a 9-6 defeat and sending Buckley through to a quarter final tie with Martyn Taylor. With the finish line in sight now, Buckley turned on the gas – he demolished Taylor 9 racks to 1 to earn himself a semi final against Arfan Dad. Two of the most promising players in the Challenge rankings in recent years, they seemed sure to serve up a close match on paper. Buckley tore up the script, however, and a convincing 9-3 win put him into the final.

Staveley’s opener in the last 32 was a battle against Dean Sporton and, whilst Sporton hung on for most of the game, Stavely ran out a 9-6 winner. This sealed his place in the last 16 where he was to face Damian Overton, the semi-finalist from this year’s Midlands Classic. He proved he was no one-hit wonder, but still succumbed to a 9-8 defeat at the hands of Staveley. The Brightonian’s quarter final was against Nottingham’s David Hopkin, and he successfully progress through to the last 4 with a solid 9-3 victory. Last to try and stop Staveley was Cwmbran’s Terry Davies, one of a growing number of Welsh players taking part in the tour. His attempt to take a GB9 title back to Wales was unsuccessful, and Staveley progress to the final with a 9-6 win.

Both players were more than capable of winning the title in Telford, but Buckley’s quality shone through when it mattered. He ran out 9-3 victor in the final, a win that takes him a whole 30 points clear at the top of the Challenge rankings.

MAIDEN TITLE FOR BRENNAN IN CHALLENGE CUP TIER II
Two debutant finalists contested the showpiece of the Challenge Tier II competition, with Jamie Brennan and Remi Passiatore fighting it out to win a first title.

Brennan’s ranking position earned him a bye in the last 64 round, so his first match was against Ealing’s Lionel Brown. Brennan was taking no prisoners, and a resounding 9-1 win make sure of a place in the last 16 where he was to face Lee Brooks. He too had no answer to Brennan’s form and went down by 9 racks to 5. Defending UPC champion Ed Poultney was next up, and his run to the quarter finals showed that the cream of the crop amongst students in Britain can hold their own on the national tour. His run ended here, however, as Brennan progressed with a 9-6 win. Mark Hughes was ready for Brennan in the semi finals, but Brennan was back to his dominant best with a 9-3 win taking him into the final.

Passiatore, making his debut on GB9, faced Jordan Turner in the opening round. It’s fair to say he came flying out of the blocks as a 9-1 win put him safely into the last 32. Jimmy Mole was next up to face the Scot, but was unable to do any damage – a 9-5 win put Passiatore into the last 16 with his reward a clash with Neil Cooper. Passiatore was enjoying his run and made it three wins out of three, a 9-3 victory taking him into the quarter finals. Jim Smith proved his toughest challenge yet, but it was challenge he overcame to reach the semi finals; Passiatore edged out Smith 9 racks to 7 and progressed to the semi finals. Craig Seeney was himself keen to make the final, but Passiatore was having none of it. Back to his previous form in the competition, he ran out a safe 9-3 winner to progressed to the final alongside Brennan.

The final had a lot riding on it for both players, but it was Brennan who kept his nose in front when it mattered. He saw out the match with a 9-5 victory to take him his first GB9 title, and end the promising debut run for the Scot who we will surely be seeing more of in future tournaments.

​​THE CUE VIEW WOULD LIKE TO THANK THE GB9 TEAM FOR ALLOWING US TO USE THEIR ARTICLE . THEY ARE A CREDIT TO THE SPORT FOR ALL THE HOURS OF HARD WORK AND EFFORT THEY PUT IN TO MAKING THE GB9 SUCH A SUCCESS!​