Former professional Darren Morgan claimed yet another significant international amateur title with victory at the 2016 IBSF World 6 Reds Snooker Championship this past weekend.

The Welshman, who got as high as Number 8 in the World Rankings, remained unbeaten throughout after winning nine straight matches in the Egyptian resort of Sharm-El-Sheikh.

A bumper field consisting of 135 players from five different continents began the event. This shortened format of the sport seems to enjoy popularity across the Middle-East and Asia.

Morgan topped Group X with 3 wins out of 3. Qualifying as one of the top seeds, Morgan avoided the preliminary Knock-Outs and automatically went into the Last 64.

He was also required to recover from 3-1 adrift against Quarter-Final opponent Faisal Khan (India) for a 5-3 success - crafting contributions of 70, 72 and 57 in the process.

Despite Morgan taking an early 3-0 advantage, Malaysia's Keen Hoo Moh forced their Semi-Final meeting all the way. The eventual champion kept his nerve with a 55 in the decider, though.

The other finalist was 28 year old Chau Man Hon from Hong Kong.

Chau had initially emerged from a tricky group that consisted of fancied pre-tournament candidates Yuan Sijun (China) and Brian Cini (Malta); teenagers with promising futures ahead of them.

The Asian then denied the event an all-Welsh affair with a 5-3 beating of former professional and Crucible Qualifier Andrew Pagett.

Chau threatened by chalking up 3 of the next 4, but the experienced 50 year old would end the match come the conclusion of the tenth.

It is another IBSF World title for the popular cueist. Morgan has had an outstanding few months with victory in the EBSA European Masters and Open competitions. As a consequence of the latter win, he was granted a wildcard into the main tour Riga Masters where he sensationally ran to the Semi-Finals before losing to eventual winner Neil Robertson.

Morgan also compiled a 'maximum' break of 75 during the tournament, as did India's Sundeep Galati. He is the second Welshman to claim this title after Duane Jones' success in the 2013 inaugural staging.

Elsewhere in the event, decorated defending champion Pankaj Advani bowed out in the Last 64 to Chen Zifan (China) 4-3.

Written and published by Michael Day on the 1st August 2016​ 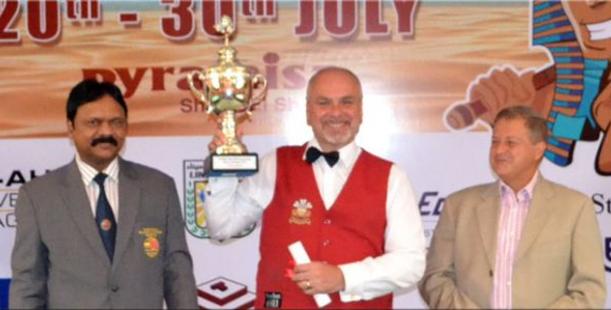