Iranian combination of Soheil Vahedi and Amir Sarkosh overcame 58 other teams to win the 2016 IBSF World Team Championship in Egypt.

Each team was made up of two players, with the format consisting of single frame contests in both singles and doubles action.

They faced a tough assignment in the Quarter-Finals; up against Thailand duo of major amateur champions Kritsanut Lertsattayathorn and Thanawat Tirapongpaiboon. However, they surprisingly turned over the Thais 4-0.

Impressive Welsh pairing of Andrew Pagett and Jamie Clarke (who had the highest break of the competition with a 131) were eliminated 4-2 in the Last 4 to set up a tie with the Chinese youngsters of Chen Zifan and Yuan Sijun for the championship.

Iran opened up the best of 9 Final by taking the first two points, yet were pegged back to 2-2. But Vahedi and Sarkosh broke free once again, chalking up the next three for victory.

The champions earlier in the year also won the Asian Teams Championship in Doha, Qatar - doing 'The Double!'

In the Masters division, Thailand pairing of Chuchart Trairattanapradit and Phisit Chandsri went unbeaten throughout (dropping just a total of 7 frames in 8 matches) to claim glory. It concluded with a 5-1 Final success over India (1) team of Rafath Habib and Dharminder Lilly.

India's Yasin Merchant registered the highest break with a 133.

For more information, and the full results, please visit the IBSF website here.

Picture above is courtesy of the IBSF (Vivek Pathak)

Written and published by Michael Day ​ 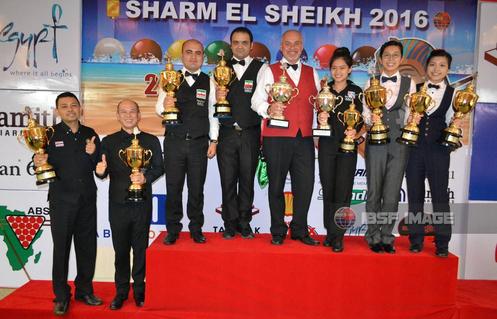