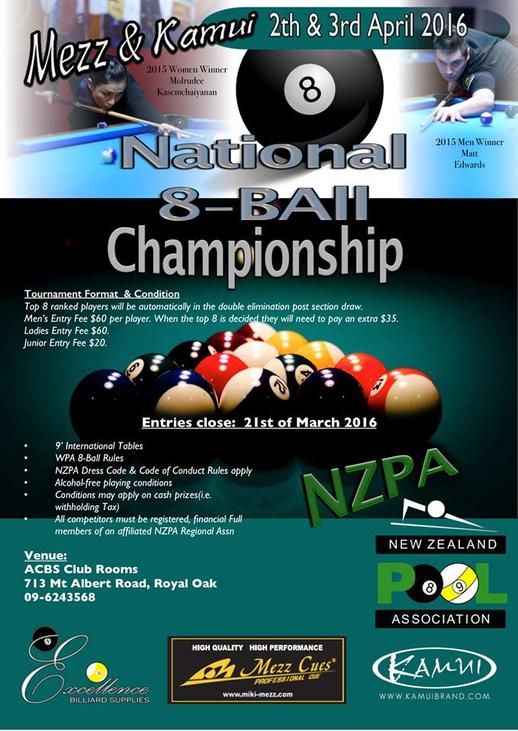 ​Matthew Edwards and Molrudee Kasemchaiyanan remain dominant in their respective divisions after they defended their titles at this past weekend's New Zealand National 8 Ball Pool Championships in Auckland.

World Cup of Pool star Edwards (above right) claimed the sixth national title of his career after going unbeaten throughout the 'Double Elimination' format.

42 players started out in the Men's event. The top 8 ranked entrants from the NZPA list were automatically seeded through to the Sunday, whilst the Saturday was reserved for qualifying.

​Edwards, the current National 9 Ball Champion too, came through his opening trio of matches 4-1, 5-2 and 5-2 before facing Will Wen in the 'Hot Seat' match. But he would keep up those relatively comfortable winning margins in a 6-3 success.

Emerging from the 'Loser's Bracket' was Louis Chand (above left), who was put to the one-loss side after losing to the eventual winner.

Multi-talented Chand, who is the reigning Oceania Under 21's Snooker Champion, showed his skills on the blue baize by battling through another three fixtures in the LB to face Matthew once again.

However, despite a spirited display, he was unable to extract revenge as Edwards chalked up a 7-5 win.

Kasemchaiyanan has the incredible feat of holding all three national championship disciplines; and she isn't ready to relinquish any of them yet either!

​She went unbeaten too to reach the Grand Final where she ended the hopes of Liz Hullen, who had earlier come through the Losers Bracket.

Written and published by Michael Day on the 4th April 2016​​ 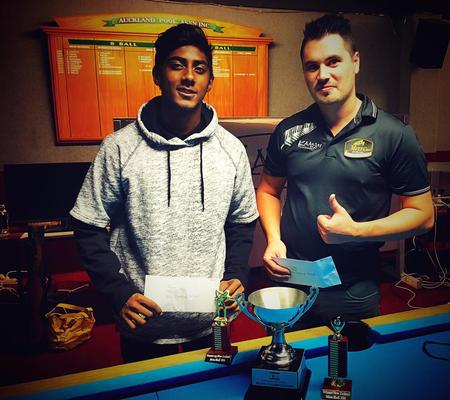