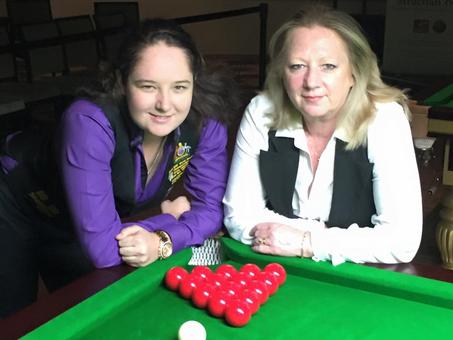 HAT TRICK OF TITLES FOR WOODS

​20 cueists (19 from the host nation, 1 from New Zealand) were split into 4 round robin groups of 5, with the top quartet of each qualifying for the Last 16 knockouts.

Woods, from the Gold Coast in Queensland, finished second in Group A behind Anna Lynch - her only defeat in that phase of the competition.

​The experienced Parashis was enjoying her return to the competitive scene after a small break away.

She actually topped her group after claiming all four matches - with the loss of just two frames. Like Woods, her knockout path was fairly comfortable, only conceding another brace of frames throughout.

Predictably, the final was close, going all the way to a decider which Woods would take to win 4-3.

This meant a hat-trick of Oceania crowns for Jessica, who was also victorious in 2013 and 2014. She was not present for the event in New Zealand last year.

In fact, it was a double for Woods, who had earlier chalked up the 6 Reds Championship at the same venue just before as well.

She was the best of the 13 player field; culminating in a 4-2 final success over Theresa Whitten.

Many thanks to the OBSF for permission to use the above photograph!