TOP OF THE CLASS! THE FIRST QUARTET OF QUALIFIERS ARE KNOWN

The highest profile player to emerge successful is China's Cao Yupeng, who instantly re-secures professional status having been demoted at the end of last season. He is in fact the only person from that recently relegated batch of pros to bounce back immediately.

The 25 year old's last qualification hurdle on Monday morning was a comfortable 4-0 victory over Joe Roberts (England); making a top break of 69 in the process.

​His encounters in the earlier rounds were also fairly trouble free, although he did need to survive a deciding frame finale against Jamie Barrett in the Last 16 on Sunday evening.

​Cao endured poor 2014/15 & 2015/16 seasons; somewhat surprising considering he had reached the Last 16 of the 2012 World and International Championships, and a career best Quarter-Final finish in the 2013 Wuxi Classic.

Fellow countryman ​Chen Zhe is the other player to re-qualify after he beat three time English Amateur Champion David Lilley 4-1.

The 23 year old had also eliminated other significant opposition in the form of Alex Taubman, Steven Hallworth, Haydon Pinhey and Ian Preece on route.

It is the second time Chen has achieved a Q-School pass - he originally done it back in 2012.

Despite appearing at the venue stages of a couple of major ranking events, Chen's time on snooker's top tier was short lived as he was unable to retain his tour card after the two guaranteed years.

With more knowledge and experience now behind him, as well as practising with Ronnie O'Sullivan in Romford, the Asian should be better placed for another crack at the big time.

Completing the trio of Chinese qualifiers was Fang Xiongman - arguably the player of the event, having put in a number of impressive performances throughout his time at the Meadowside Leisure Centre. He did however let a 3-0 lead slip against Daniel Womersley (England) in the Last 8, before falling over the line 4-3.

​Elsewhere, he made a 102 in seeing off compatriot Lu Haotian, also 4-3, in the Last 32, and racked up a fantastic 142 (the highest of the competition) in defeating Charlie Walters the previous round.

​The Chinaman will now make his full time debut on the circuit, but has already been a regular wildcard to big tournaments in his homeland before. Just last season he beat Jamie Jones 5-1 at the Shanghai Masters.​

Christopher Keogan is the only non-Chinese candidate to make it through; the English youngster beating six opponents from five different countries throughout to realise his professional dream.

Keogan exhibited great nerve and composure after ousting Jamie Rhys Clarke (Wales), Joel Walker (England) and Adam Stefanow (Poland) all in deciding frames during some of his previous results. He might have been relieved, though, that his assignment today ended being a more straightforward 4-0 success over Marc J. Davis (Scotland).

Christopher had shown potential on the European Tour before as an amateur - he frequently reached the professional rounds at many of the events.

Whilst having contrasting fates, famous names and stalwarts such as Tony Drago, Barry Pinches, Gerard Greene and Peter Lines were all gone before the Final 16.

However, there were great runs for female stars Reanne Evans and Ng On Yee, who both won multiple matches in reaching the Last 32.

The second and last event will begin on Tuesday morning with another quartet of two year guaranteed professional tour cards on offer. There will also be an additional four more places via a combined ranking list of both tournaments. 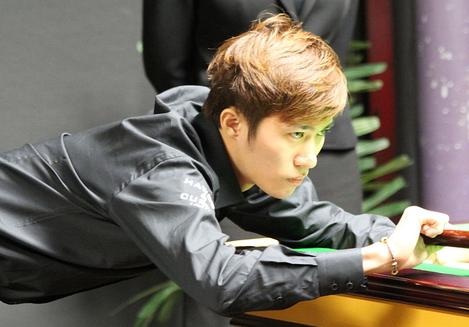