Reanne Evans (above, right) won her third straight event on the world ladies circuit this season after getting the better of close rival Ng On Yee (above, left) 5-1 in the final of the 2016 Eden Classic.

Evans had already bagged the Eden Masters in December and the Connie Gough Memorial last month, as she prepares to set her sights on regaining the World Championship title in April - a crown that Hong Kong cueist On Yee currently holds.

She started the defence of her Classic title with a perfect 100% record in her round robin group. The 30 year old won all of her four fixtures 3-0; including a victory over reigning IBSF World Under 18's champion Yana Shut of Belarus.

In the knockouts, Evans' sequence continued when eliminating Sharon Kaur 3-0 in the quarter-finals before dropping her first frame of the weekend when seeing off Laura Evans (Wales) 4-1 in the Last 4.

World Champion On Yee, who has been given an invite into the Men's World Championship qualifiers next month, was also undefeated in her group.

​She was however then taken to a deciding frame by fellow countrywoman Katrina Wan (3-2); her final berth was secured when beating another compatriot in Jaique Ip 4-1 in the semis.

The opening frames in the best of 9 final were shared and both decided on the colours; the Asian being aided with a break of 62 when chalking up the second.

But Evans soon took a stranglehold on the match, posting four on the spin for a 5-1 success. Her highest effort in the tie was a 67 in the fourth frame.

​The 10 time WLBS World Champion will now move on to the biggest event of the year in Leeds next month as the red hot favourite.

The overall highest break of the weekend was an 83 from Maria Catalano.

In the Plate event (for players who did not qualify from the groups) Vicky Shirley beat Suzie Opacic 3-1 in the final.

​Sharon Kaur was the Seniors champion after ousting Danielle Findlay 3-2, whilst Yana Shut is the Under 21's victor - she enjoyed a 2-1 win over Clare Edginton.

For full results and more information about the various categories, please visit the WLBS website here, or their Facebook page here.

Many thanks to WLBS for permission to use their photographs. 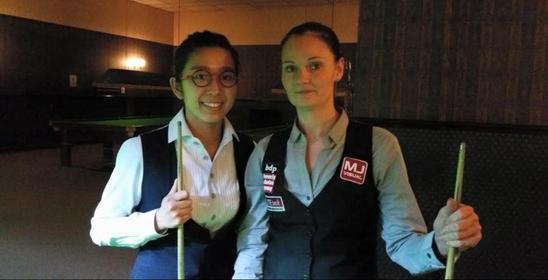