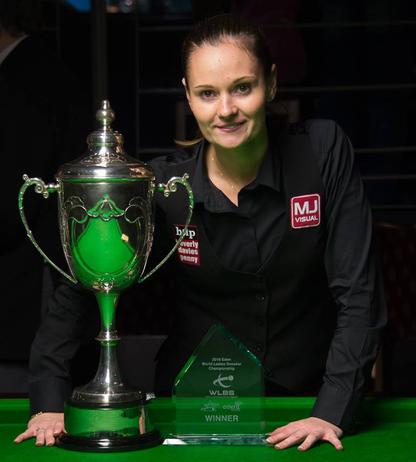 ELEVEN FOR EVANS AS SHE GETS THE TROPHY BACK!

Reanne Evans gained revenge by dethroning outgoing champion Ng On Yee 6-4 in the final to become the 2016 World Ladies Snooker Champion. It is a record extending eleventh time she has won this event.

Without disrespect, it was the final that many predicted and wanted to see. It would be the third consecutive year that the pair had clashed in the World Championship; Evans won 6-0 in the 2014 final, whilst On Yee ended Evans' dominant ten year reign as the undisputed 'Queen of Snooker' twelve months ago at the Last 4 stage. The top two seeds dished up one of the most exciting, close and tense finals in the 31 year history of this championship.

Evans rounded off her 4-1 victory over Latvia's Tatjana Vasiljeva with a 68 break, whilst On Yee maintained her record of not losing a frame so far with a comfortable 4-0 defeat of non-seeded debutant Rebecca Granger.

Motivated and spurred on by trying to reclaim the trophy she has been so accustomed to over the last decade, World Number 1 Evans started as the favourite. She also beat her Hong Kong rival in the final of last month's Eden Classic, 5-1.

And things began well for the Englishwoman, as she deposited the opening frame in their best of 11 clash.

​But On Yee, who also beat Reanne in the UK Championship final last September, hit back with a trio of consecutive frames, including a magnificent 72 break in the fourth - which would be the highest of the event.

But Evans held tough, though, claiming frames either side of the mid-session interval to square it up again at 3-3.

On Yee once again edged in front with the seventh, but Evans counter attacked, chalking up the last three to recapture the trophy and pocket £1,200.​

Despite losing her crown, Ng On Yee was very sporting in defeat. She has been a great ambassador and role model for the sport as the World Champion; the first ever player from outside of the UK to achieve the feat. Later this week, she takes part in the Men's World Championship qualifiers at Ponds Forge.

​Earlier in the day, it would be a memorable double for India.

​Chitra Magimaraj dispatched Sharon Kaur (England) 3-0 in the final of the World Seniors Championship; she also made the competition's highest break with an effort of 49 in a previous match. It would mean regaining the title she won as soon as 2014, but was not present last year to defend.

It would be a very fruitful trip for Chitra this time around after reaching the Last 16 in the main event, having qualified top of her group with a 100% record.

Despite a gallant effort by Kaur, it is the second year in a row she has lost at the last hurdle.

Varshaa Sanjeev bagged a brace of her own. She beat South Korea's Jeong Min Park 3-0 in this morning's final to become the 2016 World Under 21's Champion; only last evening she was seeing off Suzie Opacic to win the Main Event's Plate tournament too.

It was an impressive performance from 19 year old Sanjeev, who dropped just a frame throughout in each competition, and crafted the highest break in the youth section.​

With Hong Kong pairings chalking up top honours in both the Ladies and Mixed Pairs at the start of the festival, it meant just one (Evans') of the honours up for grabs was kept in the UK.

Many thanks to WLBS for permission to use their photographs. Credit to Monique Limbos.